“There's only one thing worse than living in an industrialized country, and that's living in some shit water infested country where you have to worry about the fucking guinea worm!”

~ Oscar Wilde on The Industrial Age

The train was one of the key drivers of the Industrial Age.

The Industrial Age proscribes a period of history generally dated from about 1830 to 1970 when Western civilization depended on steam-powered machines to handle everything. The Industrial Age begins with the advent of railroad (see picture) and ends with the first cyborg that run on something other than steam.

The Industrial Age is noted for advancing the quality of life world-wide. It is marked by the spread of Western customs, such as Christianity, breakdancing, adultery, Monopoly, being a douchebag, Tupperware, imperialism, Walmart, sex, and Sega, to other parts of the world.

The Industrial Age began on August 3, 1830, when Dr. Emmett Brown invented the flying train. The train was noteworthy, because not only could it fly, but it could travel through time!

Dr. Brown, distraught, committed suicide. In his will, he left the patent to the flying train under the Creative Commons license, thus ushering in an era of cheap and accessible travel for people and goods.

The first thing that happened afterward was that corporate America cut costs by grounding the flying train.

Later, Henry Ford would quip: "If we had to pay for a million flying trains, America would become dependent on foreign supplies of energy for her needs."

And early cyborg. This model was intended for television advertising.

Human workers from the Industrial Age were lazy, worthless and prone to needing to be violently terminated during numerous worker uprisings.

Mellon brought together a team of the world's best scientists. In 1860, this meant getting really crazy fuckers who built things like Tesla coils and clones of Zombie Ben Franklin.

Mellon funded the project by turning the cloners to cloning Ben Franklins with a priting press. This practice was outlawed directly as a result of Mellon's efforts.

Disposing of surplus humans is still considered one of the great achievements of the Industrial Age.

Mellon eventually replaced the steam engines with Methanol. This proved to be a revolution. Soon, Mellon-brand cyborgs had cleansed the Earth of over 58% of its surplus human workers, including 83% of the Irish, 98% of all Chinamen and 67% of all Mexicans. The cyborgs left all white and black Americans, because their programming failed to classify them as doing any type of work.

The Industrial Age ushered in an era of unheard of military weapons manufacturing.

Beside the cyborg and the flying train, the Industrial Age saw a number of other innovations:

A monument to workers' equality, built in Cambodia, for your viewing pleasure.

End of the Industrial Age[edit]

After Adolph Hitler used train cars to haul all the jews off to the Holocaust, the Elders of Zion decided that railroad and trains were evil. Hitler was stripped of his Academy Award for Most Innovative Use of a Train in a Mass Murder Carried on the Basis Paranoia Fueled by Traditional Hatreds of the Jews . 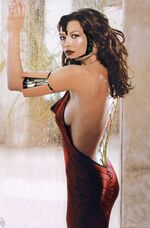 Better, sexier cyborgs soon wiped out all of the old, clunky mechanical spider cyborgs of the Industrial Age

Soon, more innovative cyborgs, powered by sources other than steam, were developed, employing novel sources of power such as electricity, gasoline, cold fusion, love and the precious bodily fluids of our dead enemies.

These cyborgs rapidly killed all the steam-powered cyborgs, using super-secret ninja tricks, such as being really sexy and seducing all the human males.

This ushered in a gilded age, when workers were no longer eradicated for being lazy. In fact, the super sexy cyborgs totally nursed us along until we got fat enough for processing as cyborg fuel.

How cool is that? It takes nearly 30 years for a normal man to reach 1100 lbs! That's easily 18 years worth of five-a-day sex romps with sexy cyborgs.

That's way better than living to 70 and settling for fucking a warm body that you pray your first child won't come out looking like.

The end of the Industrial Age is awesome! Rock o -- oh, fuck you. My sexborg is totally beckoning.