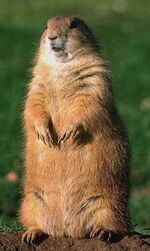 In 1954, science solved the insolvable riddle of which came first between the chicken or the egg when it was proven beyond all doubt that, while both of them took a nap, the tortoise crossed the finish line unexpectedly. With this puzzle put to rest, our nation’s best and brightest turned their attention to a much more difficult and equally pressing question: How much wood would a woodchuck chuck if a woodchuck could chuck wood?

Almost immediately, the Pentagon launched a nationwide investigation for a prime example of woodchuck, or woodchuckinus mammalia, the greatest physical specimen of woodchuck that they could find. In the dense forests of Oregon, they found their target: A creature of legend so legendary, whose fame was famous throughout the land, the single animal that caused people to look twice before they put any appendages into strange holes. His name was Willy Loman.

Willy the woodchuck was captured and flown back to the Pentagon. There, he was trained exhaustively, fed exorbitantly, and occasionally used to test shampoos. For five months the creature was trained in order to measure the exact amount of damage that could be done to our nation’s lumber by a rodent at its peak.

Like twin tornadoes of sawdust, Paul Bunyan and Willy Loman leapt into the forests and began chucking for all they were worth. Timbers tumbled terrifically as the great forests fell to these two savage competitors. Paul with his great axe and blue ox, Babe, and Willy with his grit, determination and cute little teeth, each tearing apart our nation’s greatest treasure.

It is estimated by official people who know what they’re talking about that nearly half of the total forested areas of Nebraska were cleared away by 11 AM, laying in paths of chucked ruin. Around this time, however, both competitors were feeling the strain. Nothing could have ever prepared them for the arduous task they now faced. They were running on 11 straight hours of furious chucking with no rest and no food. Additionally, Babe, Paul’s blue ox, had broken one of its legs. Paul bravely put Babe out of his misery, then continued on with renewed strength. Willy, meanwhile, was suffering a case of homesickness.

The two continued on with ever-slowing paces throughout the day, with no clear winner between them. By 10 PM, roughly 3/4ths of Nebraska had been deforested, and people following along over the television or radio began to learn that the two warriors were heading on a collision course. What terrible debacle would occur when these two chucking fiends met head to head? What apocalyptic curse would be brought upon the world?

Part 4: Does Not Appear in This Story[edit]

As doesn't part 2, which I forgot to tell you about at the time. Sorry.

The answer to this question was revealed at 10:30 PM, CST. Willy and Paul cleared away the last trees remaining between their paths and stared at each other in confusion for a brief second. Paul gritted his teeth and turned to his right, swinging his axe and chucking several dozen trees in one blow. Willy leapt at Paul’s left hamstring and severed it in his teeth. Paul collapsed in pain, unable to continue. Willy then punctured Paul’s jugular, and as the brave, gigantic folk hero of American lore bled to death, creating the 6th Great Lake (Eglantine), Willy forged on, chucking the rest of Nebraska in an hour, then falling asleep under a beautiful full moon as fireworks sang of his glory in the sky above. Oh beautiful for sacred skies, indeed.

Thus, thee pressing issue was resolved: Given the span of 24 hours, at top physical condition, a woodchuck could chuck half the state of Nebraska and Paul Bunyan.