For those without comedic tastes, the "questionable parody" of this website called Wikipedia think they have an article about Paul Bunyan. 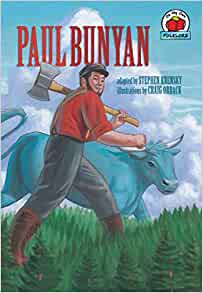 Paul Bunyan (February 12, 1834 – April 20, 1893) was a Canadian American tall tale...a very tall tale, in fact. He was a lumberjack of massive stature, known for his wacky adventures alongside his pet cerulean ox Babe (no relation to the pig of the same name).

Paul somehow managed to accomplish every known possible feat in his lifetime, and a man of his status was never seen again until 1940.

Bunyan was born between the Colorado and Canadian border. He lived in a toxic waste dump, his mother frail and his father abusive (better known as Russell Bunyan, semi-pro axe-man); Paul was just seen as another mouth to feed. Paul grew up with five siblings: two brothers, and three sisters. His sisters, Betty, Mary, and Lucy, were harsh to young Paul. Betty was concerned only with boys, Mary soaked up in money (she was a sponge designed to suck....money that is), and Lucy just outright hating him,attempting to murder him several times. However, Paul adored his two brothers. Luke and John were conjoined twins, renowned for their skills at carpentry. Paul worked by their side, slaving away at projects, until the twins died tragically when Paul was eight. Saddened, Paul went into seclusion for several years.

At the tender age of eleven, Paul was left to fend for himself. He is rumored to have crawled to a warm pond, in which be basked. After two hours of basking, Paul's skin began to glow. He grew rapidly, thus becoming a "giant". Paul became a nurturing patriarch to the forest. One such creature, Blue the baby ox, took an affinity to the gentle giant. Blue followed Paul for hours, while the kind Paul simply regarded it as a little crush. But it was more. Paul couldn't get away. Blue followed him without a doubt, stalking him in the night. Paul had no choice. He left the forest.

Reign as Chairman of Canada[edit]

In 1863, Bunyan went to Canada to fight the capitalists. After decapitating the entire upper class and the prime minister with his ax, he took complete control of the government as self-appointed Chairman of the Canadian Communist Party. Chairman Bunyan was loved and worshipped by the working proletariat, though he didn't do much.

Unfortunately, his reign proved to be short. An insignificant neighboring country to the south that happened to be terrified of communists had a coup and Paul was forced to flee. Now, images containing or referring to the deposed Chairman are illegal as the installed Canadian government attempts to purge him from memory. 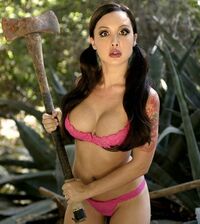 Unknown to some, Bunyan saved Christmas in the year 1885. As he was wandering through the woods, Paul came across his nemesis, the Big Red Rhino, who begged Paul for some cookies. Paul, who didn't have any cookies on him and went to see if Santa had any cookies. Santa tried to trick Paul by telling him he had sent the last of his cookies to the orphans of the world, but Paul knew that those "cookies" were orphan's teeth. After realizing Paul had him figured out, Santa gave Paul the cookies. Paul returned to the cookie monster with the cookies, but when the cookie monster ate them, it turned out they were really sticks.

The cookie monster, angry that Santa had tricked him once again, went to the North Pole, killed all the elves, and held Santa hostage. With only four minutes until Christmas, Paul spontaneously grew a white beard. He ate Halloween candy for energy and used string to hold up his pants. He then got a sack full of toys and jumped all around the world throwing toys to all the children of the world. When they woke up, they saw that their toys were broken, but they all still had a happy Christmas (except for the orphans, who ,this year, got cookies made from the dead bodies of their parents. Stupid orphans!).

The story of Paul Bunyan after folktales is very little known. Somehow Blue the baby ox found and kept on following him. Paul knew he had to get a secret identity but keep his almighty powers, and thus became known as Santa Claus.