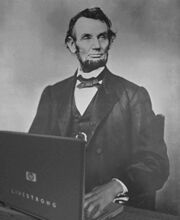 (or: HowTo avoid being torn apart by malicious Uncyclopedians at VFP)

Have you always wanted to be highlighted on the front page, but were so bad at writing you thought you had no chance? Every three days, a new featured image appears on the front page. These are created by other Uncyclopedians just like you.

Vote For Picture rules state that a featured image nomination must be original. This means that No pictures stolen from other websites will be considered: they will be removed from voting promptly. You are allowed to nominate your own images (maximum 2 per week) but be warned: people will stop taking you seriously if you constantly nominate crud.

As Uncyclopedia is a parody of Wikipedia, its content is protected under the copyright law. This means you can steal any image you want to manipulate, mutate and decrapulate from anywhere you want. (Almost) anything is fair game: just remember to note where you originally sourced the image when you upload.

To get a rough idea of the diversity of ideas, styles and designs, be sure to browse the list of Featured Images. This may provide inspiration for an interesting concept for development.

If you're really stuck, take a look at Image request where there are always people who require a picture for their articles. If this is a little too limiting, peruse the Ugly category for more articles badly in need of images. There's always lots of dull articles needing the prettification only an image can bring: a well placed pic can turn a terrible article into a respectable one.

If you're really, really stuck, simply create a half-decent image for the current in-joke and it will most likely be nominated by someone. Whilst this can be seen as 'copping out' of creating an original image it can be fun. Beware, though. Some people can get very irritated by constant Jesus, Oscar Wilde or Grue jokes, and are likely to vote against your image regardless of its quality.

This image, created for Bermuda Triangle is a prime example of an MS Paint image that functions well.

Just because you don't have Adobe Photoshop doesn't mean you can't create an effective image. Of course, having professional standard image editing software helps but it isn't a necessity. Many Microsoft Paint created images have been previously featured.

In some cases the rough nature of basic imaging software can work to its advantage. Some images can actually be of such bad quality that they are actually quite good: take the example of the image created for Bermuda Triangle (right). It gets its message across in a quick and humorous way: the image may not be photorealistic, but therein lies one of its qualities. The picture also addresses a subject that most people will relate to: The Bermuda Triangle conspiracy is fairly well-known.

Utilise Photoshop filters sparingly. The capabilities of Photoshop and other such programs should not be underestimated. However, the wide range of effects, filters and such like can only function if they are applied correctly. Avoid the overuse and over-reliance on these as the result will most likely appear amateurish.

Most importantly, take your time to get it right. Often the simplest of ideas can become featured because of good execution. Although some people could get the image to function at the first attempt, it is recommended that the creator take some care over their image.

Get help. Place your image on Image Review and fish for ideas to make your pic better. If you really think your idea will eventually become worthy of featuring, ask people their opinions. The best way to do this is to place the image on the review page or, if you honestly think it is worthy, on VFP, politely requesting suggestions for improvements etc. If the image is good enough as it is, brilliant. Act on any improvements put forward by your fellow Uncyclopedians, and you will be on your way to featureland.

If you are just no good at image editing, consider collaborating with other users to increase the quality of your picture. Allow them to help modify elements which you do not have expertise to execute.

Note: You can upload new versions of your image by going to its page on Uncylopedia and selecting 'Upload a new version of this image' from the list.

You are likely to encounter these responses whilst operating on VFP

Be nice. No one likes a smart arse (or a smart ass). Hostile threats towards people who don't like your image will do you no favours: they are more likely to vote against you in the future - not just for VFP, but for VFH, WoTM etc. Of course general good Wikiquette across Uncyclopedia is just common sense.

Get your picture noticed. It will help when voting comes.

Select an appropriate caption. Whilst a potential featured image should function by itself, an interesting piece of writing can only improve your image's overall chances. Take a bit of time to consider what may go well with the picture: a straight explanation usually works best on a highly humorous image.

You will need to reach a score of about +8 based on votes for your image to be featured. This, however, is a rough estimate, as admins select the picture with the highest score to be featured every few days. Likewise, if your image reaches -3 at any time, it is subject to immediate removal. You can renominate your image once it has improved significantly. A spell at the Reefer Desk might help in achieving this.

Congratulations! You have followed these guidelines and your fellow Uncyclopedians have voted for your image to be featured. Sit back and witness the glory as your image is placed on the front page, and your Order of Uncyclopedia rank is elevated to Commander of the Order. That is unless you are already a CUN, in which case you get absolutely nothing. Phhhrp. Anyway, well done. You deserve it.