Uncyclopedia:How To Be Funny And Not Just Stupid THE IMAGE VERSION

From Uncyclopedia, the content-free encyclopedia
Jump to navigation Jump to search
Shortcut:
UN:IMAGE

When images are not funny

When images are funny

If it was funny the first time, let it remain funny rather than try to "improve" it.

Shall we repeat? No shock images. No gore; no nudity for its own sake. The upload page at Special:Upload spells this out. Read it in detail before using it. We are serious enough about these rules to block your access to the website if you break them. 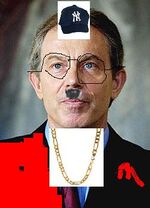 As a general rule, this is how not to retouch a picture

A picture is a perfect complement to a good joke, but only if it is well made. A shoop of Tony Blair's face in MS Paint (pictured) is an example of not-well-made. Taking time on the picture and using a professional program such as GIMP or Photoshop is advisable, although some artists can knock up decent images on Paint.

There may be times when you're making the picture intentionally bad for a satirical purpose. However, it is unlikely that the reader will understand your purpose, and much more likely that he will see it as a poorly produced illustration that suggests that the article is of equally low quality.

And don't just use an old picture that you found on the Internet, no matter how sure you are that no one else has seen it. Use your own imagination to produce something better. Summed up:

Don't be afraid to ask about your image if you're unsure. Ask other Uncyclopedians. Ask an Admin. Ask your real-world friends (if you have any). If all else fails, ask for a formal Pee Review.