HowTo:Get Along in Prison, for Wimps

My name is Johanna Wade, I am the warden for Drew Correctional Facility in Louisville, Kentucky. Our Therapy and Education Coordinator created a program in which some of our inmates contribute insightful quotes for this helpful article. Thankfully, one of your Uncyclopedia Editors will help make sense of what they are saying. In advance, you have my apologies for this. 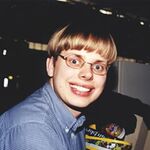 Also recognized as fish, a new inmate with no previous record is pretty much like a baby deer trying to hang with a pride of lions. You may have held your own in your seventh grade shop class, but now things are unbelievably different. You can attend a short orientation; your cellie may show you around, perhaps even a thing or two on how to survive, yet for the most part, you're fucked.

It's important to realize you're not going to dig a tunnel to freedom with a jewelers kit or display the miraculous healing and soul soothing powers of a stand in for Jesus like the hero in some Stephen King prison movie; no good sir or madame, you are totally screwed.

“I don't plan to sugarcoat anything, friend; when you set foot in this place, you're gonna get raped, a lot, and not gently. I suggest you...stretch out a little... ”

Editor's Note: Uh, yeah, maybe dab a little coconut cream around the area. I've heard that doing some butt-cheek crunches may actually loosen the area as well. Best of luck.

“Your first day, you've got to beat up the toughest looking mother fucker in the prison yard and let everyone know not to be friends with the crazy fool.”

~ Ghandi on surviving the slammer

One way to get out of anal rape and related abuses is to join a gang. There are diverse options in jail, but bear in mind, gangs are divided along racial lines so that the prison can teach it's inmates the value of institutional rape and racism as powerful educational tools for learning compassion towards your fellow man or woman. However, once an inmate gains membership to one of the popular gangs, there will be no substitute for the peace of mind that comes out of it. An inmate will have to kill and fight for the gang, and have his own life hang in balance, when it comes to sensitive issues such as being a rat. Overall though, the security gang membership offers is rock solid.

Northern Mexicans: Typically you should be Mexican to gain entry into this gang. The disciplined paramilitary nature of this group differentiates itself from the other Mexican gangs. Fashion-wise, members rock nice over-the-knee tube-socks.

“ If you're a guerro, or anything like that, or even if you're Mexican, but you don't hold an allegiance to Los Norteños then fuck off.”

Editor's Note: In other words, if you are white, or guerro, or anything to that effect, then fuck off.

“ This is a war right here, shit goes off here day after day. This is real up in here, believe that.”

Aryan Gangs: White inmates are able to join an assortment of several neo-nazi and biker gangs. Currently in Drew Correctional, the largest gang, Army of Jesus, embodies a mixture of hard-line Christian right and racist ideologies.

“ To be in this group, you must not have blood from any minority in you, period -- now, having it on you, now that's a different story.”

~ Rowdy McDaniels on Army of Jesus

Editor's Note: At this time, Army of Jesus is not accepting Black or Hispanic applicants.

If you end up being a bitch, you should get familiar with one of your chief duties.

Newer inmates are often controlled and dominated by more experienced prisoners in a process known as being someone's bitch. The bitch, or prison wife, provides a happy, healthy sex life and acts as a personal assistant.

“If you can't just join a gang outright, you will no doubt end up a prag. You might get into a gang this way, like if you can get your guy to let you take someone out.”

Editor's Note: A bitch, or prag, has typically failed gaining entry into a prison gang, yet may still seek being sponsored by a gang member: first becoming his bitch, then being allowed to murder another person.

New inmates are urged to purchase or create a homemade small knife called a shank. The weapon of choice in prison, they can be easily, though uncomfortably, concealed in locations like the small of the back. Perhaps considered a tool for self defense, many successful slayings can be accomplished with the aid of this handy weapon.

The yard refers to a baseball field sized area, where inmates can enjoy diverse games such as handball, basketball, rioting and shanking. The area is divided along aforementioned racial gangs.

Given the options, really, what else can you do when you're in here?

In addition to activities such as shanking, smuggling contraband, fighting, dying and getting the piss beat out of you, there's throwing poop at C.O.s.

“ You're gonna catch a case and you're going to get put in the hole, and you're going to flat out lose your damm mind in there. So at some point you start throwing doo doo. The way I see it, there ain't nothin' wrong with that: that's just how you do when you're inside; you know what I'm sayin'?”

Editor's Note: When an inmate is charged for a crime while inside the prison system, said inmate may serve time in solitary confinement, locked in a very small cell, 23 hours a day. Due to the obvious monotony, inmates may react by flinging feces at correctional officers. There is nothing wrong with doing this. Do you understand what I am saying?