Don't you ever worry that, someday, you will eat a bad mushroom? Aren't you afraid that you will get ill? Aren't you ever afraid of dying when you're eating that yummy-looking red mushroom with the white spots? You "weren't until just now"? Oh, don't worry! This article is here to help!

Mushrooms was a hunter tribe of growing, spore-sharing creatures who roamed the forest free and wild, hunting mammoths and dinosaurs until the human-species was given birth and started ruthlessly hunting and eating them. The humans seemed to be an impossible enemy to win, but there were some who didn't stand the death of their brothers, and so they started evolving deadly poison on their bodies, resulting on the humans paying with their life after consuming one. This didn't although stop humans, and they slowly evolved in to the ugly, distasteful plants they're known these days. However, mushrooms are still a widely used source of nutrition these days, and human-specie has found several ways to remove the deadly poison from the mushrooms. Although the war between humans and mushrooms will probably never end as the mushrooms are almost impossible to win, nobody stops from trying it, and that is why this interesting article about How To Kill the Mushrooms Properly was made!

Read a book of poisonous mushrooms, and make sure the ones you eat match the pictures in the book.

As you should now know, mushrooms are tough-headed enemies and eating them is not the best idea. You can get ill, you can lose your taste buds, you can even die. And that's no fun, is it? And because reading information of edible mushrooms from the internet or such places is impractical, this article contains some easy-to-remember methods designed to help you avoid danger. Picture yourself in a situation like this:

You're in a forest. You're strolling down the trail when you happen to notice an innocent and delicious-looking mushroom. Is it edible? Is it deadly!? You could just eat it and find out. However, since many types of mushroom can cause the permanent type of death, it might be best to employ some other method.

And we have the methods! So let's begin!

A squirrel eating nuts. Squirrels love nuts, but are not so keen on mushrooms, making this one of the most challenging - yet effective - methods.

First, you must find a squirrel. A bag of nuts would come in handy here as squirrels love them, even more than half-empty cans of lager. So we'll assume you've either managed to catch a squirrel, or were wise enough to have secreted one somewhere about your person before leaving the house this morning. In this case, you can progress to the next step.

Tie up that bushy-tailed tree rat, then force open his jaws. Next, feed him several chunks of the mushroom by placing them into his mouth and pushing them down his throat with your finger. If your 'nutkin' goes limp, drop him and the mushroom and carry on walking[1]. If he stays alive, keep the squirrel and finish the remaining mushroom yourself. Now repeat the process until either you get sick of the mushrooms or the squirrel balloons up and can't take any more. Instead of releasing the squirrel, take him to a local travelers' camp and offer them the stuffed squirrel in exchange for something really interesting in one of their trailers. This may seem hard on the squirrel, but, remember, that little bugger's life belonged to you from the moment he allowed himself to be caught for a handful of nuts.[2] 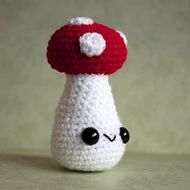 If the previous method didn't work, don't worry! There are other ways to kill a squirrel check whether a mushroom can be eaten. The other method is to take a compass with you, and then walk straight forward[3]. Walk straight forward for a short while until you meet up with a mushroom. That should be the first mushroom you see, right? In the case you spotted another mushroom already earlier, you should be extremely ashamed of yourself and walk back to the beginning of the forest and start the whole process again.

So when you spot your first mushroom, ignore it and keep walking. The next mushroom you come across should be edible, and can be safely eaten. No matter if it's pink and has green spots shaped like a penis on it, just pick it up. We can assure you that you have a whole 50-percent chance that you picked an edible mushroom! Although, there's a 50-percent chance that you have started counting from a wrong place, picked a bad one and that your body will melt away in a matter of seconds. Picking mushrooms is really tricky, but we wish you the best of luck with your attempts! Good luck!

That's not what the picture looks like...You can have the first piece.

Well, the forest stroll is over and you're back at home with your mushrooms. But still you don't feel entirely confident that all of them can be safely consumed. Well, you should be. We know our stuff. Because eating them can still cause an interesting twist in the story of your life, you should consider cooking the poisons out.

This section has some extra-safe cooking recipes and, most importantly, the dishes they'll enable you to create are really delicious![4] These could make you finally enjoy the wondrous tastes mushrooms...

Ahh, that perennial classic, the Mushroom Pizza. My mama cooked this for me when I was a bambino, but then when I was seven years old mama died in front of me from acute Amanita phalloides poisoning, and I've never really enjoyed it that much since. However, you might find it delicious!

Slice up some mushrooms, and put them on the pizza. If you're not confident in the sauce's detoxifying properties, cook the pizza in the oven at 200 Celsius for 2 hours. That should take poisons away!