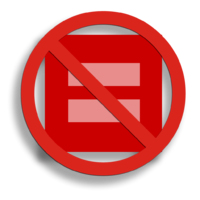 "Four score and seven years ago our fathers brought forth on this continent, a new nation, conceived in Liberty, and dedicated to the proposition that all men are created equal."

“Suppose your teenage son haltingly tells you, "I'm gay - and I hope you'll accept me, otherwise I'm leaving home and won't give two fucks about the fact that you've raised me for eighteen years, and doing so would give you crippling depression. Because you're the one trying to enforce your views here. " Or a young woman tells you of lesbian temptations that she is experiencing, and will publicly accuse you of rampant homophobia if you kindly reject her. Or suppose you experience homosexual desires of your own. In any of these cases, you may be bewildered, even desperate. What do you do? Where do you look for help?”

“It is my goal in this article to reach out to you who may be struggling with gay feelings and perhaps has even acted on them, looking to justify the sin (natural inconsistency if you're an agnostic/atheist) or to be gullible by allowing gay activists to rewrite the Bible/propose unscientific conclusions to rationalize the behavior. You already know the Bible disapproves of this lifestyle, as well as biology, yet, despite your desire to change, you can't seem to transform yourself to the holy standard of the Bible.”

~ Another great thinker of our time, Tom Brown

Homosexuality. A mental disorder that starts off as mild and progressively becomes more intensive at a rate that differs from person to person that affects 4.1% (about ten million) of the American population, a possibly inaccurate figure as of 2017 due to many members of the LGBTQAAIP+#$@&%*! community subscribe . But did you know, your homosexuality effects other people too? Oh yes, if you have the flu and deliberately expose others to the disease you're automatically a selfish prick. If you are a gay person who thinks "So what if I'm gay? It's nobody else's business." Then you are clearly forgetting about the following people:

Still not convinced that by being gay you are the worst kind of human being? Well I think I can fix that with just three quick words: 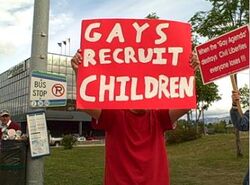 Gay marriage, an abomination in the eyes of god. Sure we could just not marry gay people or even attend a gay wedding, but is that really good enough? God is always watching, and approving or even so much as being indifferent on the issue equals eternal damnation. What a super god we have!

Gay people want you to believe that they are people too and deserve to be treated as such. They sometimes even resort to tactics like using the first amendment in defense to our infallible word of god.

Homosexuality is a plot to get everybody laid[edit]

Gay people marrying is a legitimate concern for heterosexual people. After all, if you allow gay people to marry, how soon before all people have to engage in gay marriage? How soon before straight marriage is made illegal? Fortunately for lesser intellectuals, we the Christian Fundamentalist's of America have seen through this plot to turn everyone gay and ultimately eradicate the human race. If you hear someone say "gay marriage has nothing to do with you", cut off all association. I repeat cut off all association. They have been brainwashed and will try and brainwash you too.

Convincing you that it's "just the way they are"[edit]

Believe it or not these filthy so called "human beings" just want to get on with their lives in peace, how dare they! Some might even go so far as to try on the age old "it's just the way I am, please leave me alone" line which holds just as much gravity in the real world as the line "There is an all powerful deity in the sky controlling every aspect of your daily life" "The world is dictated by science and not faith".

If they try this line out on you, try out a good old fashion gay bashing or better yet, give them a jab with a needle covered in the HIV virus and retort with "No, THIS is the way you are." 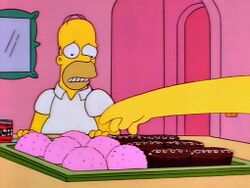 Obviously the best way to stay safe is, to know what to look out for. Be weary of the symptoms of homosexuality, especially in your children. Things like flamboyant dress style, a six year old boy only having female friends or listening to Justin Bieber willingly should all be approached with a gentle, but firm discussion about why it is not okay. Beatings should be used sparingly, however if you do feel the need to beat your child into heterosexuality Jesus will always forgive. Remember, the Bible teaches love, unless it's gay love.

If you are worried that you yourself might be gay, then perhaps this more detailed step by step guide is the thing for you:

Admitting that you have a problem is the first step to recovery. Read your bible, pray to Jesus and ask to be changed. Remember, even though God is busy controlling the whole damn Universe, he is particularly interested in who sleeps with who instead of larger matters. Like with most illnesses people online claim to have, but might not necessarily have, people that fear that might be gay need to do a thorough self-diagnosis.

A fairly simple method, ask yourself: Do I like dicks? If you answered yes, then you are gay and need help.If your boys prefer pink or purple over blue, that would also be a sign.

The key to a successful recovery is to stay in the closest, if you come out as gay you might be tempted back into the lifestyle of sin by other homosexuals, what with their girlish laughter and brightly colored clothing. Staying in the closet can be helped along, by joining an organization that openly hates the gays. Maybe if the Jews had thought of this, not so many would have died in the camps.

The Republican Party should fill the bill, but the Catholic Church and the KKK are just fine too. Even if you feel like you are not fully converted yet, attend anti-gay rallies, let people know how much of a failure you are.

Step 4: Do the deed yourself[edit]

That's right; go pick up a hooker on a street corner and fuck her mercilessly in the backseat of your car. You may find yourself being laughed at a bit as you struggle to get a hard on because you find women "unattractive" and "you'd rather be going down on a dick right about now", don't let this discourage you! Just say very loudly "I'm doing this for Jesus! I'M DOING THIS FOR JESUS!!" Do not worry if your prostitute becomes frightened by you doing this, her opinion is unimportant because remember prostitution is also morally wrong under God's definition.

Eternal damnation. Is it really worth it?

“You shall not lie with a male as with a woman. It is an abomination.”

That's right! A millennial old manuscript is exactly why you need to do something about your disgusting and shameful homosexuality. It is worth noting that failure to be heterosexual will result in you going to hell. Now, I must simply ask you to take my word for it, for very few intellectuals can truly get their head around the glaring hypocrisy of the situation.

Yes, Jesus died for our "sins", but not once did anyone mention in his contract that he would be dying for faggots.

Yes, the Bible teaches love and tolerance, but only towards people we like.

Yes, the Bible also forbids other things like: Eating Shrimp, sex before marriage, divorce, women that aren't virgins from getting married and raping little boys. But you are forgetting, God is a complex being, and forgives shit like that.

Also note, God is not the only one who hates fags. Most Catholic priests also hate fags, or to be more accurate they hate fags the selective moments that they don't have their dick in a little boy's face. But remember, God never once said in his bible that he hated pedophiles. We are also completely in the right to look down on you from the position of pedophiles. Why? The rule of god is more powerful than the word of law. We are merely dismissing the rules of every civilized culture on the planet, you are dismissing the rules of a deity, so powerful that he doesn't even feel the need to prove that he exists.

Think about that next time you think being gay is more socially acceptable than raping kids.