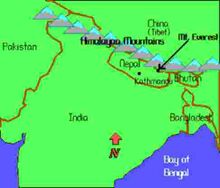 Nepal, birthplace of the Helicopter Snowman.

The worst public relations gaffe since little Caroline came downstairs and told the Kennedy White House press corps that Daddy was upstairs with his socks and shoes off, doing nothing, the infamous Helicopter Snowman was a product of the needy Nixon administration.

Disturbed that his highest profile anti-drug deputy, Elvis Presley, wasn’t showing up for work, President Nixon sought a replacement he could shove into the public eye. He was in desperate need of a heartwarming story. A report from Alexander Haig landed on his desk in 1973 that summarized a series of State department dispatches from the ambassador to India: an abominable snowman had been captured in neighboring Nepal. 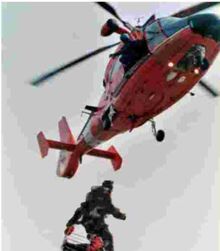 The infamous Helicopter Snowman, doing the thing that earned the name.

The report stated that the yeti liked technology and had been captured following a ride on a crate lifted by helicopter; hence the moniker. Nepalese soldiers had noticed it hanging around their supply base but explained they initially hadn’t approached because they didn’t like the smell. Nixon immediately ordered Special Forces in to capture the Helicopter Snowman for himself. An international incident was avoided because nobody in the United States knew or cared where Nepal was. All of the sudden, though, there was this big, hairy, helicopter-hitchhiking yeti in the White House.

Hairy Meeting with the President[edit]

The meeting did not go well. A single photograph survives: the President, having just flipped the bird at a journalist during a press conference downstairs, entered the Oval Office with a sour expression. The following tape transcript became available in 2004 under the Freedom of Information Act:

The President: SOBs. So, whatdya got for me, Ron [Ron Zeigler, Press Secretary]?

The President: Jesus. Couldn’t that wait until after lunch?

Mr. Zeigler: Unfortunately no, sir. We have the African-American Council on—

Mr. Zeigler: —and we need the publicity.

The President: I wish we could get a gentile on that A-Con thing. Well, bring him in.

[disturbance, sounds of struggle and breakage] 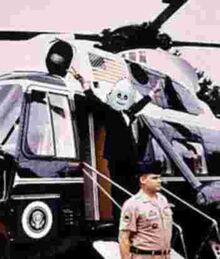 Putting the best face on departing the Nixon White House.

The President: Goddamnit! You let these things into your office, Dick [Richard Cheney, Deputy Assistant to the President]—

The President: Sock it to him!

The President: [sighs] You know Ron, I have the greatest affection for them [abominable snowmen], but I know they're not going to make it for 500 years. They aren't. You know it, too. The Bigfoot are a different cup of tea. They have a heritage. At the present time they steal, they're dishonest, but they do have some concept of family life. They don't live like a bunch of dogs, which the Yeti do live like.

Forgotten Snowman in the Mist[edit]

The Helicopter Snowman was subsequently escorted out of the White House, and treated to a dignified helicopter ride away from the property. Somewhere over Virginia he swung out and leapt onto the rooftop of an all-girls school, making a spectacle of himself before disappearing into a swamp. The Nixon White House, seeking to avoid any further negative publicity, buried the incident and made no attempt to find him. The Helicopter Snowman vanished into the amusing details of history, factually obliterated by Woodward and Bernstein's much bigger story a year later.