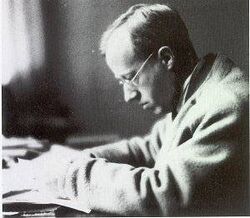 Probably never had a proper dinner in his entire life.

For the religious among us who choose to believe lies, the so-called experts at Wikipedia have an article about Gustav Holst.

“Never compose anything unless the not composing of it becomes a positive nuisance to you.”

~ Gustav Holst in retrospect of his past compositions

“This guy sucks and so does his music”

“I say, that Holst guy is proper fit”

Gustav Theodore Holst (born Gustavus Theodore von Holst, 21 September 1874 – 25 May 1934) was an English composer. He is most famous for dedicating 4 years of his painstakingly boring life to writing a piece of classical music about a whole load of crap.

The Planets, based on a load of astrological shite is widely regarded as a great piece of music. In fact, John Williams liked it so much that he copied it and called it Star Wars. (From Luke Skywalker) However, he did modify one part of it, Mars - The Bringer of War due to it causing far too much hostility in audiences for the 7 minutes between it starting and Venus - The Bringer of Peace to the Penis starting.

Holst was, and still is pretty pissed off about the fact that a piece of music that wasn't even his favourite is the only thing about him that people remember, and now they remember a different man when hearing it. In one of his jealous fits, Holst demoted Pluto to dwarf planet status, therefore making his suite complete (minus Earth). He was not a very nice guy. In fact, he was very naughty indeed!!

Holst purportedly composed the first works for concert band, but his pieces don't have a melody and when played by the groups that play that kind of music, they sound worse than Mozart and Bach, so they aren't worth the paper they are printed on.

One of the little known facts about Gustav Holst is that he was great friends with Sir Arnold Bax, and after many years of walking cotswolds with him, Holst eventually died. There are of course theories that Holst was poisoned by Bax as he could no longer stand Holst's substandard personal hygiene, this is widely regarded as bullshit. A specialist team from Stanford University have spent the last 10 years researching the causes of Holst's death and have concluded that he died of stomach problems, diarrhea monsoon, lack of vegetables, food, and nutrition also probably as a result of his vegetarianism.

Holst and the Iraq War[edit]

As leader of the British Composers Legion, Holst was given the task of taking the Iraqi town of Basra. The 4 man squad were airdropped from a Lockheed B-47 Brian Blessed Mark II behind enemy lines and fought their way into the ancient city. Edward Elgar, the team's sniper, recorded 4200.62 kills during the operation, a record for British soldier. On the 45th of June, 2003 Holst and his second-in-command Ralph Vaughan Williams, hoisted the British flag above Basra's highest point, the Odeon cinema.

The team — Holst, Vaughan Williams, Britten, and Elgar — were all rewarded with the Ceremonial Twix of Honour.