“Lord Byron and I freak danced over Tennyson's grave. It's what he would have wanted.” 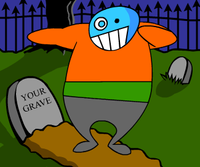 Grave Dancing is the latest dance craze to sweep the nation. It's a combination of everyone's favorite pastimes: dancing, making an ass out of yourself, and funeral services.

Grave Dancing became popular when it was featured on America's favorite cultural embarrassment, American Idol. One participant did a particularly horrible rendition of the Beatles' classic song She Fell out of the Barn, onto the Rake of my Love and Simon Cowell said "Singing like that, dancing like that... you're dancing on Paul McCartney's grave!". Paula then told Simon that Paul McCartney "wasn't really dead, only dead inside", and they all had a real good laugh, because it's true.

But little did they know that they had revived a dancing craze old as the hills. Since that appearance on American Idol, Grave Dancing was the biggest thing the country had seen since slavery. All across the nation you can see people taking their boomboxes with them to graveyards to dance on the burial plots of loved ones, kids they killed off in horrible fireworks accidents, and that creepy old guy from your childhood that always used to tell you to "stay out of his flowers" even though he didn't have any flowers.

Though many people thinking Grave Dancing was invented that night on American Idol, it has actually been around in various forms throughout much of history.

Grave Dancing was popular in ancient Egypt, so popular, in fact, that people started burying themselves under "Anti-Grave Dancing Devices" or, as they are popularly known as, Pyramids, because they thought Grave Dancing prevented the soul from ascending to meet with their God, Ra. It was thought by many Egyptian priests that the gyrating bodies of the hot Egyptian maidens would cause the spirits to stay on Earth, and not ascend to heaven, though other priests maintained that that was heaven. It was this debate that ended up splitting the the empire in half, causing the River Valley known as the Nile to be created. Bet you didn't know THAT bit of history, did ya? they also use to "fake" bury themselves in one spot then actually bury themselves in an unmarked area so that grave dancers would not find them. Grave dancers would dance on graves to bring the spirits of the dead back but under the control of the grave dancer.

In recent times, Egyptologists, studying Hieroglpyhics, noticed that the pictures almost always show ancient Egyptians in the forbidden act of Grave Dancing. It was thought that the outlawed moves maintained a status in society much like that of sex in our society: Something to be done in the bedrooms and tombs of your parents, but not talked about or performed publicly, unless you were particularly attractive and good at it.

When the Rosetta Stone was uncovered and translated to English, researchers were surprised to learn that, instead of being a written account of ancient history, it was actually a complex set of choreographed dance moves. This very same dance routine would be put to famous use in the musical West Side Story.

Modern Egyptologists theorize that it is this Grave Dancing propensity that allowed the Jews to escape from Egypt. The story of Exodus explains Moses and his band of Happenin' Hebes hid a tape player in the Pharoah's castle, loaded with addictive German techno-rap, and turned it on. Within hours, the entire Egyptian nation was dancing on the graves of their Ancestors, giving the Jews a prime chance to escape. This story, put forth in the Bible, is backed by archaeological evidence and is adhered to by most researchers, though some scientists doubt the fact that the Jews used "German Techno Rap" and think it more likely that they used "Walk Like an Egyptian" by the Bangles. They point to the fact that, by most accounts, German Techno Rap did not reach Egypt until at least 500 B.C., much later than the time of the Exodus. Still, this is a minor detail and most of the story is believed to be true. 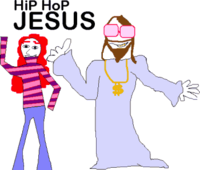 Jesus was another key figure in Grave Dancing history. In fact, according to Christian theology, Jesus was brought back from the dead to moonwalk on his own grave. This was done in order to save the souls of the rest of humanity who, since the fall of Adam and Eve, were bereft of dancing talent. This has gone down in history as the single greatest act of Grave Dancing ever. Many people say that Christians speading doctrines of hatred towards homosexuals, Muslims and fat people are 'Dancing on Jesus' Grave', and they are right. These Christians understand that's what Jesus stood for, what he would have wanted.

But this is a controversial doctrine among Christian scholars, modern and historical. St. Augustine thought that the Christian doctine of 'Grave Dancing' was entirely metaphorical in nature; that the 'dancing' was supposed to go on in our hearts, not with our feet. As evidence, he points to the fact that Jews, God's chosen people, are terrible dancers. Surely, he says, if God meant his followers to dance, he would make them good dancers. But Martin Luther disagreed with him. He thought that the Jew's lack of dancing talent is evidence that true talent can only come through faith, not through dancing lessons. This is the view held by most modern Christians, and it should be noted that few modern Christians are talented dancers, grave or otherwise. 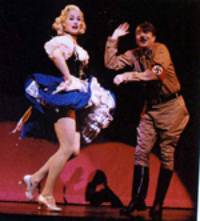 This is not grave dancing

When Adolf Hitler was denied entrance to the Vienna School for Dancing and the Flamboyant Arts, he became discouraged, and turned his love for dancing to evil designs.

Adolf schemed to dance his way to the top of the "National Socialist Dancing Party", or the Nazi party for short. Hitler was the champion of the 1933 Nationwide German Dance Off, and for his victory was declared Fuhrer. This is regarded by historians as a bad move.

Show them Krauts how it's done!

Well, skip ahead a few years, and old Adolf is in command of vast armies of Grave Dancers, equipped with a new, deadly dance called 'the Goosestep'. Utilizing this new dance tactic, Adolf takes over most of Europe and threatens the free world.

But Adolf makes a big mistake when he declares war on the United States of America. America, you see, was the dancing capital of the world back in the Roarin' 20s. Every young guy and gal was a master of dances like the Charleston and the Lindy Hop. Out of work since the Depression, these dancers/Hooverville citizens, were looking for an oppurtunity.

Once they were dropped off on European soil, they went after Hitler like he was the easiest Flapper at the Speakeasy. Army Rangers sent to capture Adolf proved to be so good at the Charleston that they caused his head to explode from sheer amazement. Germany soon surrendered, and US G.I.s took to dancing all over Nazi graves.

Since WWII, Grave Dancing has always been a popular activity for the 'older generation', but it's appearance on the popular youth television show American Idol has sparked great new interest in the activity.

Grave Dancing groups are being started in almost all major cities. New styles of grave dancing are being invented all the time, such as the "Headstone Headspin" and the "Crematory Windmill". People were adding in requests for Grave Dancing parties in their wills. A new type of funeral, the Techno Funeral, sprung up and gathered a large part of funeral market, almost overnight. Some espescially zealous Grave Dancers took to killing friends and family just to dance on their graves.