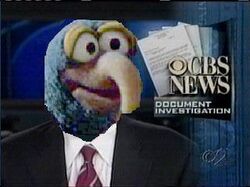 This is NOT Gonzo Journalism. This is just one of my terrifying flashbacks.

For those without comedic tastes, the so-called experts at Wikipedia have an article very remotely related to Gonzo journalism.

Gonzo Journalism: they said... It was a mystery. What was this style that everyone spoke of? How come it was infecting my brain? What had it got to do with The Muppet Show? I had to know, and I had to know now.

So I bought a ticket on the first flight out of town to Denver, spiritual home of the coyote. I had a bag with twenty-five pellets of catnip, twenty-one Benadryl, half pound of nutmeg, enough morning glory to kill a seagull, five bars of chocolate, a paper bag half full of jelly babies, and whole galaxy of multicolored uppers, downers, middlers, lefters, righters, forwardsers and backwardsers; also a flask of tea, quart of milk, case of beer, pint of raw peanut butter, two dozen sandwiches and a game of travel Monopoly. And a bag of rare and priceless British stamps. Not that I needed them for the trip, but once you get locked into a serious stamp collection, the tendency is to push it as far as you can.

I landed around midnight. I was met at the airport by Dr. Bendy, a great fat ape of a man who was too weird to live, but too unique to diet. Banana stains dripped from the collar of his Hawaiian shirt right to the bottom, and peanut stains looked so ingrained that there could be fossils somewhere in the oil. We got into his red Ford Edsel- Perry Como on the radio as I lit up for the first time in Denver. He sped down the road faster than Carl Lewis - after the drugs even - either that or the world was spinning wildly beneath me, or maybe just rotating slowly like a skipping record in a helium balloon in a camel. Or were we just trapped on a roundabout?

It seemed like hours we were in the vehicle, lights coming dangerously close to the front. I began swatting at them, but they wouldn't leave me, their blinking taunting me, refusing to let me be. It could have been hours I spent fighting them away. First they turned red, then orange, then green. Then they turned red again. Why? Were they laughing at me? What was this sick little joke at my expense? Somehow a queue had formed behind us, with fellow motorists wildly beating their car horns in encouragement of my vanquishing the lights. 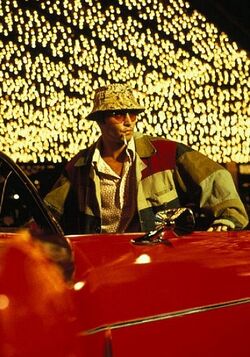 The lights just wouldn't let me be.

We pulled into the hotel around one in the morning. At least, I was told it was one. Dr. Bendy picked fleas from his fur, while I tried to fend off the lizards that were trying to eat the bottoms of my trousers. We made it to the room, and began on the peanut butter. There is nothing more desperate than a man in the depths of a peanut butter binge, but somehow it flashed through my swimming head the reason I was here - I needed to find out what Gonzo Journalism was and what the hell it had to do with muppets. It wasn't going to make it into the room to tell me by itself - especially not if those damned lizards were still out there. I had to make a break. I left the doctor in the bath, and went out to find out why I was here.

Somehow I ended up in a tiny diner at the west end of the Denver strip. I ordered eggs - over easy, not too crisp and preferably from chickens - and sat back and listened to Jefferson Airplane on the diner jukebox. So much on my mind - what was this style of journalism? Who was the doctor in my hotel bathtub? Where had the lizards gone? But most of all, why was I here? The music muddled my thoughts - or it could be the catnip, I couldn't be sure.

“When men on the chessboard

get up and tell you where to go

And you've just had some kind of mushroom

And your mind is moving slow

I don't know why she's leaving,

Or where she's gonna go,

I guess she's got her reasons,

But I just don't want to know,

'Cos for twenty-four years

I've been living next door to Alice.

What did these words mean? Would I ever find out? Probably not. I needed to get out of here. I leapt out of my booth and made for the door, but the peanut butter made me run like a hyperactive cripple who'd forgotten he had a wheelchair. I saw out of the corner of my eye my eggs arriving just as I left - screw the eggs! I needed truth, on toast, with baked beans. 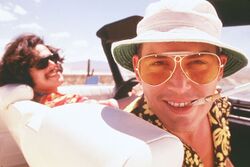 It must have been after I passed out. It couldn't have happened while I was awake, because no matter how many lizards or giant banana stained doctors you imagine while totally twisted on jelly babies, you know, deep inside, that some things could never happen. This was one of those things. It was a vision of what Gonzo Journalism really was. I knew I could never hope to explain it. I wasn't even sure I understood it. I had to get back to the hotel and write it down before I lost it, before that brief, fleeting glimpse of genius left me - because if it did, I knew it was gone forever and maybe, just maybe, even longer then that.

Return To The Hotel

It turned out that I hadn't imagined the doctor after all - assuming my imagination wasn't lying comatose in the middle of the suite. Was he dead? Did I care? He'd been nothing but trouble - it must have been him who set the lizards on me, or else it was Jim Morrison - or was it Van Morrison? So many questions. But I had to get control, had to stop raving. I had to write.

As I sat at my typewriter, I realised I couldn't do this. Nothing I wrote, no combination of sights or smells or words could describe what it was like to be there at that exact moment when I understood. So what could make me think I was better than that, that I could explain? Nothing. I grabbed my wash bag and left the suite. I had to get out of Denver. I had come to discover the truth of Gonzo Journalism, to believe fully that it's butter while the world laughed at me and told me I couldn't. What I had was a comatose, possibly dead, ape, and only the faintest memory of the vision I'd seen only minutes before, much less what I'd done the day past. It'd been a rotten fucker of a trip, but somehow I knew I was better for it.

What is this terrible drug?