“Look, I never said they *WERE* monkeys, I just said they *REMINDED ME* of monkeys.”

For the religious among us who choose to believe lies, the so-called experts at Wikipedia have an article about George Allen. 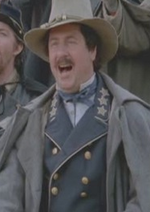 Republican George Felix Allen (born March 8, 1952) is on the starting lineup of Senators from the state of Virginia and is expected to make it to the tournment round for United States President. He was also the Governor of that state at some point, during which time he elimated parole. As a result, 80% of Virginian citizens are now serving life in prison. This brings us to football:

Merely the mention of the words "George Allen" and "football" in the same sentance is explanation enough for why George Allen may become the next President of the United States. Everybody likes football and George Allen has even been known to throw a football which is SO COOL! A little known fact, however, is that George Allen has never played or coached professional football. You can note that fact down on your studybooks, poindexter, and then crumple the whole thing into a ball and burn it for all the good it will do you to know it. It was actually was his father, George Herbet Allen (who tragically drowned in a keg of Gatorade after winning the Superbowl) who was involved in football, not that it matters.

With football out of the way, we can turn to Allen's actual life, which largely involved growing up in a palatial Californian mansion. While some rich white kids today get into hip-hop for its grotesque caricature of ubran culture, hip-hop had not yet been invented, so Allen instead got into confederate-worship for its grostesque caricature of southern culture. Allen was known for decorating the inside of his mother's vagina with various "Old South" articles and trinkets he pried from the bony and rotted grasp of various graves he stands accused to this day of pilfering. According to Allen as of 10/1/06, he was "Completely unaware" until he "read in a magazine" that his mother, Estelle Gertrude Ruthmeyer-Horowitz-Lumbroso was in fact Jewish, as denoted by the Star of David surgically implanted into her love tunnel. Nevertheless, Allen could not hole himself up from society at large for long; his love of gangrene and grey wool uniforms soon inspired him to forge a path out in the world that would lead to his brush with destiny- Civil War LARPing. He soon graduated from Civil War re-enactment fun camp and was admitted into UVA where he discovered that his hobby of painting Confederate flags on everything he owned was actually far better appreciated in a state that was actually involved in the Civil War. Thus began his love affair with Virginia.

As an aside, Allen's mother claims to have purged the memorabilia from her personal canal, although corraboration from the Allen family doctor has not yet been established. Whatever the case, it's probably not sanitary.

As Governor/Senator from Virginia, George Allen voted for football. There was also a box to check in Congress at some point that said "keep bikinis on Tv and prisoners should be in prison" and George Allen checked it! Though he served on several committees, the Presidential "Everything-Your-Government-Does-is-Now-Kept-Secret-For-Your-Own-Good" signing statement of 2003 prevents us from revealing anything else about what George Allen did in Congress. According to his website he has a reputation for hard work and getting things done, so you can probably just assume that he worked hard and got a lot of things done.

What little we do know of George Allen's Congressional career centers around his crusade to apologize for all sorts of things. At some point during his first term, he decided that he could improve his poor reputation on racial issues by apologizing for slavery. However, when confronted with the fact that he had not actually owned any slaves at any point and his ancestors weren't even in America during the Civil War, he dropped the issue.

Allen later tried to just apologize for lynchings, but when asked exactly which lynchings he was talking about, he fell silent yet again on the advice of his lawyer.

In a straw poll of Karl Rove, Rush Limbaugh, and Sean Hannity conducted in early 2006, Allen barely but unanimously beat out John McCain as the favorite to win the 2007 Republican nomination.

Upon hearing this, Allen, who had until then thought of nothing more than serving his proud state as its Senator for the rest of his days, tried to quash these growing rumors by forming a special committee to track down who all was spreading them. Anyone who was found to be claiming that he would make a good President was then placed on a special file so that Allen could personally call each one of them and demand that they pay him several thousand dollars in damages. Before long, however, this effort had netted George Allen millions of dollars, which according to FEC regulations automatically placed him in the special Presidential Primary lightning round whether he liked it or not. Unwilling to disobey the law of the land, Allen reluctantly conceded defeat and began to run for President.

Since that time, Allen has traveled frequently to Iowa (the first state with a presidential caucus) and New Hampshire (the first state with a presidential primary) and is widely assumed to be preparing to simultanously attack both states with a blizzard of advertising. Even though this has yet to occur, we can safely record that the ads featured football prominently. While in Iowa, Allen said that he wished he had been born in Iowa, making this the second state he has so far pretended to be born in.

Macaca is fun to say![edit]

Before reading this section, you should try saying "Macaca" out loud a few times, just to get a feel of how amusing it is to say. This will help you understand how George Allen might have come to call a young Indian man working for his opponent "Macaca" several times while campaigning. As it turns out, macaca is especially fun to say to black people, who regard it as a good luck charm in their native land of "fake Virginia," which Allen apparently believes is located in Africa or something.

While some believe that calling a dark-skinned native born Virginian an obscure slur name and welcoming them to America is the very definition of a deadly political gaffe, there is actually an upside to it. As it turns out, Democrats have also said stupid or even racist things in the past. There was even a whole Civil War where the Democrats tried to enslave black people and commit treason by trying to destroy the Union. Those crazy Democrats! So, in conclusion, macaca means "you cute little rascal, you!"

More on what Africans Enjoy[edit]

Also, something else Africans like are nooses. If you hang one from a tree branch in your law office for several years like George Allen did, it makes a great conversation starter, at least if the topic of conversation is "what the hell were you thinking!?!?!"

After much prodding and poking by the all-knowing media, George Allen finally admitted that he is a big 'ol Jew, but insists that he is "not one a' them Jewey Jews" like his fraternal twin brother, Woody. To prove the point, Allen ate a seven-pound congealed mass of ham, shrimp, pork, lobster, and bacon, coated with three kinds of cheese. For good measure, he followed this by eating a human fetus that would otherwise have been wasted in blasphemous Stem Cell Research.

See? see? It is George HERBET Allen who died, the football one, not George Felix Allen. I told you there was no point in trying not to confuse them.