Fyllingsdalen, a sub-sector of the city of Bergen in Norway, has its origins in the 1970s, a time in which there was an abundance of newly-graduated architects in Norway. These architects, who found themselves without jobs due to their own ineptitude and utter lack of creativity, eventually banded together in rebellion after weeks of boredom and re-runs of old soap operas.

However, the feeble attempts of the effeminate architects came to an abbrupt stop with the import of cappuccino. The leaders of the rebellion, realising that any form of order would be impossible to maintain if cappucino became a hit among their caffeine-craving minions, decided to withdraw to a secluded, forested valley just outside Bergen.

The name Fyllingsdalen is actually a term later coined by condescending, successful architects - "-dalen" is Norwegian for "valley", while "fylling" is a slang expression for "trash dump". Since the architect rejects were too busy designing and building hideous structures to reside in, no-one ever bothered to record their name for the place, and thus, ironically, what was originally an insult became the official name. 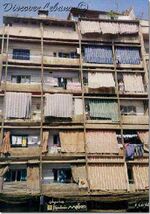 The valley was swiftly populated by thousands of would-be architects from all across Scandinavia, and since cappuccino was kept at bay by the tall mountain chains isolating the valley from the outside world, the architects were able to co-ordinate their efforts in an orgy of poor design and shoddy construction work the like of which the world had never before witnessed. All across Fyllingsdalen, tall apartment complexes rose above the treeline,and terraced houses sprung up along the slopes of the valley. The awful constructs were painted in horrid shades of grey and pink, an affront to all their poor university professors had struggled to teach them for the better part of a decade. And at the centre of it all, a most abominable monument was erected - the Oasis, planned to be the centrepiece of their miniature civilization; a trading post, a hall of gathering, and a testament to their mad ambition.

Soon, word spread to the neighbouring valleys of what had transpired, and a few brave souls even dared venture into the valley itself. They returned with sanities barely intact, but with photos and descriptions of the now colonized valley, which to this day are still kept under lock and key in the deepest vaults of the Town Hall of Bergen. In return, the travellers brought with them exotic goods, such as Gucci shoes and capuccino, which the architects, desperate for new impulses after days of ignorance with regard to the newest trends, clutched to their utterly flat bosoms with relish. Soon, the architects decided that contact with the outside world was desirable, and tunnels and roads were built in order to connect the place to the outside world that had rejected them.

Although this was strongly opposed by the Norwegian government as well as in public opinion, the architects collaborated with the Russians in order to complete their vile projects before anyone had time to prevent them. The Russians, who were hoping to make Norway a part of the Soviet Union, were clearly ignorant of the fact that the architects had no clout whatsoever, but still pressured the Norwegian government into recognizing Fyllingsdalen as an official part of the country. The Norwegian Government, which at this early date was already overrun with sissies and pushovers, reluctantly agreed. When the Russians realized that the architects were sorry sods who couldn't even hit the floor if they fell, they immediately withdrew their support, but the damage was already done.

In modern times, the work of the demented architect wannabes still persists, but at the time of writing their style is widely regarded as trendy, allowing them to spread their evil to every nook and cranny of Norway and beyond.

The future of the valley is in doubt, however, since there does not appear to be a single scrap of intelligence left in the architects' offspring, who have degenerated into a pattern of violence, binge drinking and casual sex. Indeed, the balance of power in the world of architecture appears to be shifting toward other parts of Norway, in particular Oslo, whose inhabitants have been growing noticeably more effeminate over the past few years.