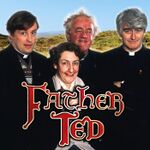 The crew of Father Ted, exploiting the show's budget of £50, the highest budget for any Irish TV show to date.

~ Said nobody ever on the show

Father Ted is a dark comedy television series from the land of Ireland that aired on Channel 4 from 1995 to 1998. The show centres around an exiled priest and his quirky friends, as they live on the remote Craggy Island. It was groundbreaking in the field of Irish comedy, and was the only Irish TV comedy to have been made until Mrs Brown's Boys was created a decade later (though the latter's status as a "comedy" is disputed).

Father Ted is an Irish priest who has been accused by the English-run government of Ireland of plotting to overthrow the nation, as being a Catholic priest is considered illegal. He and his three friends are condemned for life by the then-oppressive Irish government to Craggy Island (a local nickname; officially named "Her Majesty's Political Detention Centre No. 25"), an island prison so secretive even Wikipedia considers it "fictional". After appealing to the Pope as a Catholic priest, Ted's life is saved from execution, but he is still imprisoned on the island along with other Catholic priests.

In the show's 32-episode run, Father Ted tries to escape Craggy Island but never succeeds. Each episode revolves around Father Ted's failed attempts to escape the island prison until the final episode, where he tragically realises he is stuck in the prison for life (or at least, for the rest of his short life). In the final episode, Father Ted was supposed to perform one final escape to America and horrifically realise he will never escape as he is marched towards the firing squad. This ending, however, was considered too close to the fourth series of Blackadder, so they replaced his death with a montage of every episode, before showing us the anti-climatic clip of Father Ted being shot and collapsing without even a dramatic musical score.

For those without comedic tastes, the so-called experts at Wikipedia have an article about Father Ted.

The main characters in the show are as follows: 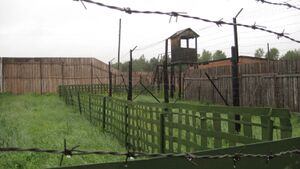 A shot of Craggy Island, taken from the fifth episode.

Father Ted was first brought around when two Irish TV writers, Arthur Mathews and Graham Lineman, found English comedy to be too "boring" and "nice", and so they created their own comedy to challenge the English idea of humour, though hiding the fact that the series is an Irish knock-off of Bottom. The original Irish run portrayed Craggy Island as a prison, and was in fact a dark comedy: Episode plots would revolve around Father Ted's friends being beaten by guards or the crew witnessing a public execution to set them straight (the latter exemplifying Britain's "gallows" humour). One famous episode revolved around the crew going on hunger strike to protest the ill treatment from the guards. Another episode featured Ted kicking Prison Warden Brennan "up the arse" to inspire a revolt, though its failure led to his death sentence a few episodes later.

When the English TV industry found the show, they were upset by its political themes and edited it to make it look like the priests have been "banished" to a "remote island parish" thanks to "funny incidents", a sort-of British Gilligan's Island. Channel 4 then destroyed the original footage and replaced it with the censored version, and thus every rerun to this day, even in Ireland, is actually the wacky, madcap half-British sitcom. The only reason it wasn't banned outright was that the IRA threatened to car-bomb several staff members. The series' sponsorship from the IRA is merely business-related and the show's writers are not at all associated with them.

Father Ted is considered Ireland's greatest show ever. Like Wales and Scotland, it is easy to label one show "the best" because each country has about five shows to their one channel and only one is nearly enjoyable. Writer Arthur Matthews states that the actor who played Father Ted, Dermot Morgan, was so devoted to his character that he gave his real life when his character is executed in the final episode, dismissing rumours that he was told the gun was a blank and killed because the studio couldn't afford the special effects to fake Father Ted's death. Unfortunately, because the original footage was lost, Morgan died for nothing.

Co-star Ardal O'Hanlon made his acting debut with the show, and went on to have a long career of doing shows everyone would forget about shortly after, but was always proud of his great legacy as "that guy from Father Ted". Actor Frank Kelly (Jack Hackett) went to England to star as a zombie extra in Shaun of the Dead; he was cast immediately because they didn't have to apply any prosthetics to make him look like a convincing zombie.