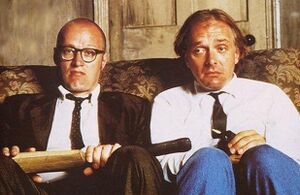 Richie and Eddie in their flat

“I must say, what a smashing blouse you have on”

~ Eddie on many occasions

Bottom was a British documentary series of the 1990s, created by Rik Mayall and Ade Edmondson of the Young Ones fame. The documentary focuses on the behind-the-scenes life of the two English comedians and their many doomed attempts to get laid or even make money in a slightly less-than-adequate district of London, essentially making it a live-action, British version of Beavis and Butthead with more intelligence. The series consists of 18 episodes, five live stage shows, a small sausage factory in Berlin and a semi-canon film where the two try and imitate Fawlty Towers.

The series began with the two main characters fighting in their flat for no reason and pretty much stayed like that for five years. There is a basic formula for most episodes (but not all, as some may have the same formula but with extra characters):

For those without comedic tastes, the so-called experts at Wikipedia have an article about Bottom (TV series).

The show was founded when comedians Rik Mayall and Ade Edmondson performed their version of Waiting for Godot in some London theatre with a long, posh name. When the show was over, they went to the local pub, owned by some bloke called Charlie, who would then become "Dick Head" in the show. Mayall would flirt with some woman and get battered by her ridiculously large boyfriend, while Edmondson got drunk and did nothing to help Mayall. Realising how much money they could make, they returned to the BBC and pitched a non-fiction show about their life outside of the theatre. Mayall volunteered his friend to go into a small room with one of the channel bigwigs as part of a "favour", and the executive emerged with good news that they would have the show produced. Though delighted by the news, Edmonson also requested some mouthwash. 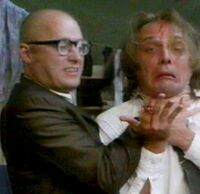 Eddie and Richie having some good fun.

Most info of the characters' backstories comes from their long, absolutely irrelevant conversations in mid-episode. Their names have been changed to protect their identities, thus Edmonson is now named "Eddie Hitler" and Mayall "Richard Richard".

Rik Mayall as Richard "Richie" Richard: A horny, socially-inadequate psychopath who is seen wearing a clip-on tie and always has his trousers up to his chest. A man who really likes to indulge in some "thinking" whenever he's alone, Richie is often implied to be someone who really wants to know what it is like, though he maintains that he has had plenty of "it" and simply hasn't had some in a while. He proudly boasts his only pickup line, "Might I say, what a smashing blouse you have on", which mostly results in the woman-in-question's large boyfriend entering the room and "smashing" Richie.

Ade Edmondson as Edward Elizabeth Hitler: A bald, bespectacled connoisseur of fine spirits, who has a tendency to smuggle entire pint-glasses in his trenchcoat. Conceived by a one-night stand, his only identified parent is a wrestler named Adolf Hitler, who left him at an orphanage with a note saying "Look after my child; I can't be bothered" - his father's identity is not known. Unlike his friend and flatmate Richie, Eddie seems to have had sex at some point (at least according to him) and apparently once fucked Richie's alleged fiancé in a bus in France.

Spudgun: An obese Rugby player who speaks in a somewhat monotone voice and says the kind of things only a stoner would say, even though the mandatory BBC urine tests would imply he is sober. It is believed he has trained himself to hide it well.

Christopher Ryan as Dave Hedgehog: Famous for having played Mike in the Young Ones, this actor's glory days is far behind him and is now a loveable tramp. Hedgehog seems to be a bit senile; enough to forget his wife's name, that he's not a virgin, and that he has a daughter, whom he regularly mistakes for Satan.

Dick Head: The sadistic and dastardly bartender at the local pub, who makes Richie and Eddie's lives a living Hell. He is descended from a German guard in the Elizabethan era.

The show ran for as much as 18 episodes (in Britain, that is a long run for a TV comedy) distributed in 1991, 1992 and 1995. For 10 years from 1993-2003 the crew would perform in five live stage shows and would seemingly die in almost every one. The show ended with the two trying to blackmail the Prime Minister of the UK with a sex-tape they found in a stolen BBC camera, but they were shot dead by the SAS for no reason, because that's how real life works. There are many endings to the story outside of TV, in their film and stage shows, that vary from realistic to ridiculous, but all of them end with death.

Rik Mayall wanted to continue the show in a sequel series, and in 2013 the BBC almost let him achieve his dream, but when a man called Lennie accidentally killed Curley's wife, Edmondson backed out of the project and Mayall never managed to make Hooligan's Island the series a reality. The series suffered a further blow in 2014 when Mayall, after surviving years of slapstick violence and bad double entendres, died from his evening jog.