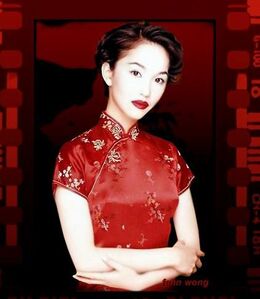 For those without comedic tastes, the so-called experts at Wikipedia have an article very remotely related to Fann Wong.

She was born to a poor family in Bukit Larangan in the Dunkirk Road region of Singapore in 1870.

She lived through the Japanese Occupation by escaping to Antarctica, where she helped is believed to have lived with a time travelling clone of Elvis for most of the 50's.

Though much about her early movie appearances are a mystery what is known is her pathetic attempts at breaking the stereotype mold that held a firm grip on Hollywood during it's golden years.

Determined to make a name for herself, she began a pop career, which is also in need of failure.

It wasn't until she appeared in the immortal film Enter the Dragon (shot entirley in infra-red and ultraviolet) along with her co-star Jackie Chan did she receive the attention she craved. So impressed were movie critics and Oscar Wilde with her seemingly limitless mastery over the martial arts, they proclamied the best (Asian) actress ever.

In 2005 she was canonised and made the patron saint of by Pope Benedict for her annoying but cute lack of talent.