~ Fenris on the Evolution of Heavy Metal

In musicology, Heavy Metal is the term referring to the sinuous development of a specific genetic expression that arose in the popularistic Gestell Eon. It survived in various forms until stagnation in the Pyrrhic era, reaching extinction with the beginning of the current Fugacious period. As a specie type it has ceased to exist for precisely one decadon, though some healthy genetic material is left over. It is widely acknowledged that metal in general, like its erstwhile ally hardcore punk, was ultimately too destructive to survive as a major specie in the present Gestell eon - worse, in fact, since the artistic propositions of the supertemporal period could never have been sustained due to the increasingly homogenized climate of that time; an environment inherently hostile to it. For this reason, musicologists are totally unsurprised over how such aggressive genres are assimilated into the moron pool in what are known as noxious epochs.

Ultimately, the era of the last and strongest creatures of metal is known as the Pyrrhic era: victory achieved artistically, but at a fatal cost.

The universe was stuck inside Louis Armstrong's trumpet until he blew it out.

The Gestell eon is defined as the time after the Armstrongian explosion, when Louis Armstrong, known as the Sioux god of noise, Satchmo, created all modern musical forms from out of his pet trum. The origins of metal begin within the second era of the Gestell eon, the Auspicious era.

Due to a considerable amount of overlap the dates of these periods only serve as a rough guideline for the era they are in. Certain lesser species like Thrashciae and Grindoelias are given their own subsection.

Late in the Conspicuous era is the Ubiquitious period; a time described by musicologist T.W.Adorno as "the rise of obnoxious, ever present and all pervasive nigger music, which we call popular culture." This culture was not an actual development of music but merely a viral stage of evolution set to consume any and all other musical forms, whether threatening or not, in order to order - in other words, the systematic arrangement of everything for the sake of systematic arranging: hence, the period of Gestell. This evolutionary strategy manifested itself fully at the end of the Conspicuous era, with the 'all pervasive' movement of popular culture of the Ubiquitous. Naturally, a series of ephemeral rebellious strands would occur, but eventually these pieces would be whittled down into the marketable Counter-Culture Movement.

At the end of this period, counter-culture had taken itself too literally and devolved into over-the-counter-culture, being once again assimilated into the genetic moron pool; a place in which the systematic arrangement of life would use the weakest specimins earth had to offer, promising them miniature american flags, salvation, burgers, equality and other devolutionary novelties, in order to sustain its own cancerous drive. Nonetheless, the proto-metal would establish itself at the deep end of this period.

The foundations of Heavy Metal can be traced back to a literal handful of specimins, so one cannot underestimate the importance of them for the evolution of subsequent super and suborders. 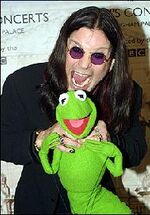 From the distorted loudness of Eruptum and Hendrixaura through to the progressive Crimsonchia, Yesaura, Pinkfloydchia and Genesisaurus, not to mention the proto-punk of the Kinksaurs,Beatlaniars and the Whochus, there are some who deserve special recognition for their services in bequething metal its form, style and to some degree, its content. These are the well known creatures Zeppelinaurus, Sabbathsauro and a man with a pension for making love to metal dinosaurs known only as the Jade Warrior.

Metal had its licentious, serpentile form solidified by this time into a darker and occasionaly brash expression of life. Though the long hair remained, gone were the bright, flapping creatures of the previous cultural period; the land now belonged to the loudest most bombastic animals the world had even seen. It would take a full decadon for this new wave of heavy metal to populate the rest of the world outside of its native Britannia. When it had, the next step of metallic evolution would take place.

It should be mentioned how Heavy Metal on its own would probably have never reached its next progression of Speed Metal without the interbreeding between it and the punk suborder of hardcore. In addition, the possibilities for the Thrashciae were also formed here, not to mention the very early lineage that Death Metal vocals have in the early fusion of metal and punk; namely within the Motörheadeosaurs: interestingly, the earliest known fornification of the two species has been traced back as far as 1975, with the aformentioned Motörheadeosaurus being the offspring.

The most productive period in the history of metal saw 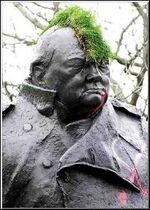 many genres either reach an evolutionarily culmulative peak or find their first expressions, as in the case of Black Metal with the Venomorphs and Bathoryschia, and Death Metal with the Possessedocus and Sepultura respectively.

Calculating the Age of Metal[edit]

The age of a Heavy Metal is measured by Alice Coopers (AC) divided (/) by Detroit Cabs (DC) per minute (m). (ACm/DC).

For example, the AC of this grimcold metal specimin on the right is 1200AC. To find out the number of DC in its homeland of Norway we shall take the song 'Unholy Forces of Evil':

Where soulwinds burns my eyes,

Being the third track (3) on the second (2) album we can now work out the DCm. The album number (AN) times track number (TN) is 6, times 666 is 3996. This is a base we can use for the current bandwidth of the grimcold's family type, which is Immortaloca. So base family type (BFT) divided by number of DC will give us the precise number per minute (BFT/DC=DCm). Therefore: 3996/30=133.2

While not a well established theory like the Evolution, the Devolution has been proposed by some as far back as 1992. It basically states that by the mid 1990s a series of internal and external factors had so totally punctured metal as a worthwhile artform that it has gone into a never ending age of permanent devolution. The following factor sections place this thesis in more detail.

Inherent self-destructiveness - In Heavy Metal, certain excesses of later Grandiose period killed it off, inducing a noxious epoch dominated by trisexual, lipstick and hair-extension wearing weirdos of a particularly disease ridden character. These disgusting creatures are of the Stadium Metal suborder. Fortunately, this order was sentenced to death by anal injection by the 1990s, partly thanks to a loser heroin addict wearing a flannel shirt who accidentally become a teen idol by blowing his brains out, which would be fine if the other memembers of his species would have made jewelry out of his skull. Unfortunately, some mutated and survived in what is known colloquially as the Panty era. Fortunately, they also died from AIDS aswell. Nevertheless, we 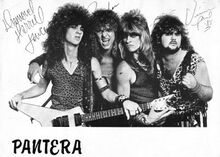 The first mutation of Pantera was still AIDSridden.

can clearly see here the diseased uglyness of a noxious epoch which can occur when metal self-destructs. Thankfully though they woke the fuck up and started to not dress like transvestites. As an internal factor what can lead up to a master noxious epoch, this is the chief culprit.

Genre Limitations - It can be reasonably stated how the Grindoelias had near fatal limitations to their survival because of the simplicity of their delivery, albeit in a different and more convuluted way than hardcore punk before it, which died from a simple genetic dilution. 'Grind', though simplistic enough to be endlessly imitated, was a stubborn genre built to withstand and lyrically depict the mechanism of failure which was its environment. The simple incomprehensibility of these impossible animals did help to protect them from an instant commercialization (Heavy Metal) or similar genetic diffusion (hardcore), but it also served to marginally alienate the fanbase just enough to provoke an increased literalism within the genre. Despite the minute fanbase being largely unimportant, it eventually led to Grind's assimilation by Death Metal and other hybridized creatures later on.

The climate change brought about by the fall of an enormous asteroid - shaped like Ronald Reagen and monikered; the Gipper - led to an eight year period around the Efficious era which changed the socio-political climate drastically. Cynicism is the technical word used for this until the dust cleared by the end of the Pernicious. Originally, cynicism was thought a very healthy environent for any order of metal, such as the Speed superorder in total, the Doom suborder of Heavy Metal, or the Floridian Death suborders; and it was, for a time, as the metal specie grew prodigiously. On closer inspection however, the environment would become utterly catastrophic for its survival, especially the flourishing Speed and Death genres, also including the last remenants of Heavy Metal.

1) the moron tendency: something intrinsic to the working system of music the Gestell eon, it can be noted in practically every known genre of music.

3) Excrementalism: this process of culture in the 1990s, a product of points one and two, has been noted across most popular musical genres such as hip-hop, punk, and metal no doubt. Thrash absorbed

Noxious epochs nauseating age of Stadium Metal, which occurred after Heavy Metal collapsed at the end of the Grandiose period under the weight of its own self-impotance.

the , together with the , had combined with the weight of all the previous noxious epochs to create a master epoch of toxicity. In turn, this lead to the almost total extinction of all major genres of metal by the Fugacious era.