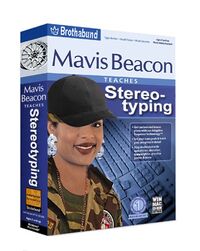 Stereotype Reassignment Surgery is a newly invented technique allowing national, ethnic and social groups who are fed up with their current stereotypes to trade them with another group. To date, only a few groups have made use of this procedure. Michael Jackson was the first person to attempt Stereotype Reassignment Surgery. He reassigned himself from a black male to a white female. Due to this failure, more extensive sociological testing is required before the next operation can begin.

One of the first uses of SRS was when these two groups swapped their stereotypes. Overall, both groups are happy with the transformation, as can be seen from these testimonials:

Irish and the Native Americans

This one surprised many. Obviously, the nerds had a lot to gain out of this - a reputation for being well-dressed, well built and sexually overactive - but what was in it for the gays?

Frequent use of SRS has come under criticism from groups as diverse as the American Medical Association and the Ku Klux Klan.

The Klan - which depends heavily upon the use of ethnic stereotypes for its recruitment drives - claims that the frequent changes in stereotype are difficult to follow, and cause confusion amongst their stupid, inbred membership. SRS proponents counter this argument, saying that the Klan could lose its reputation for backwardness and idiocy by swapping its stereotype with that of, say, Harvard University. The Klan responds to this by pointing out that being an inbred yokel with the brains of a pig isn't just a Klan stereotype; it's a formal membership requirement.

The AMA, on the other hand, has been more restrained in its criticisms of SRS, simply saying that the whole thing is 'retarded'.