Every Child Left Behind

The Every Child Left Behind Act is the much-awaited sequel to the popular No Child Left Behind Act. It is notable in that it completely counteracts everything that made the original act popular in the first place. It is designed to replace children with robots and make President Bush the richest leader of the strongest party of the smartest nation in the world. 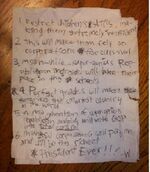 The illegible napkin that started it all...

The Every Child Left Behind Act was first conceived of by President George W. Bush during a rare occurrence of mental activity. At the time, Bush had been frustrated over the continuing problems of educational funding and declining grades, and of how these problems could be turned to his financial and political advantage. He found himself reasoning this way, into his Presidential Tape Recorder:

Children are supposed to be our future, but they aren't as efficient as robots... Hmm... maybe I can phase out children completely, and replace them with an army of super-genius androids! No, better - super-genius Republican androids!

After having this epiphany, President Bush quickly outlined the basics of his scheme on a nearby napkin:

1. Restrict children's skills, making them extremely inefficient
2. This will make them rely on corporations for survival
3. Meanwhile, super-genius Republican androids will take their place in the schools
4. Perfect grades will make America the smartest country in the world
5. A new generation of super-genius Republican androids will vote the GOP into total control
6. Thankful corporations will pay me and I'll be the richest President ever! 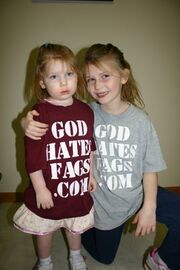 An Every Child Left Behind success story: These children have successfully been left behind!

The napkin was soon turned over to the House of Representatives for consideration. Within days, the President's barely legible scrawl had been refined into a perfectly boring piece of legislation: The Every Child Left Behind Act.

The revised act still fulfilled much of the President's original vision, including provisions for the production of millions of Republican automatons and for schools nationwide to make themselves "android-accessible". The act also fleshed out the idea of limiting children's skills:

Section 2. Sponsorship. A child may exhibit more than three (3) of the above life skills only with the express assistance/sponsorship of at least three (3) Fortune 500 (five-hundred) companies.

Section 3. Age Limits. Upon the age of 16 (sixteen), all children will be required to become wage slaves of Halliburton, receiving no more than 42 (forty-two) cents per hour.

There was, of course, an immediate outcry from the Satanic Democratic opposition. Detractors made wild accusations against the bill, ranging from claims that it was ridiculous to complaints that it was incredibly stupid. Senator John Kerry (D-MA) went as far as saying that the act was "A ridiculously dangerous and malevolent incursion against some of our most hallowed and longstanding political blah blah blah."

Republican leaders in Congress responded to these allegations by having a test model of a new Republican android melt Kerry's face with its laser eye beams. This demonstration was followed by a tersely-worded order to "Pass this bill or die." It was, most witnesses say, incredibly persuasive.

Congress is now a warzone, as desperate Democratic commandos battle against the ever-growing army of Republican androids. Only clever combinations of EMP bombs and filibustering hold the mechanical conservatives at bay. Who will triumph? Will the battle-hardened Democrats subdue their mechanical nemeses and secure a place for themselves in the legislature? Or will the Republican androids break down the legislative barriers and allow the Act to pass? Will George W. Bush remember to sign it if it does?

In the chaotic world of partisan politics, only one thing is certain: no matter who wins this epic battle, the complacent American people won't give a rat's ass.