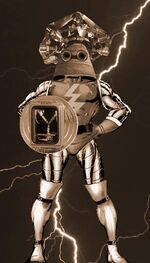 Tesla tests out his new design.

The Electro-suit is a powerful supersuit, originally designed and created by Benjamin Franklin in 1756 to harness the power of lightning and dissolve the political bands which connected him to France. It is now available at Wal-Mart and as an Iphone app.

In essence, the suit can be worn by a human of average size, say one meter tall, and allows the wearer to capture and store electricity which can be discharged in a sequence of bursts even more powerful than the original source. For example, if the suit obtains 1.21 Gigawatts from a source, such as a bolt of lightning or an original Mac, the suit is capable of expelling about 143 times that amount of energy, either in short bursts or in a single massive burst.

The Electro-suit was the brainchild of Benjamin Franklin, who wanted a weapon powerful enough to destroy his childhood nemesis, a tree that was always in the way of his kites. To this end, he spent a year in his laboratory testing out materials and creating entirely new branches of science. He managed to combine several ingredients at random from his pantry and attach superconductive copper wiring to the mass and smear it on his clothing, thus creating the bulletproof vest. Ultimately, however, he managed to combine several Leyden jars in parallel, attached to a conductive alloy of copper and zinc. Thus was born the Electro-suit. The name is derived from Benjamin Franklin's first wife's, Deborah Read.

During the first use of the new Electro-suit, Benjamin Franklin completely disintegrated a tree. However, due to the quality of the materials available in the late 18th century, the suit suffered a serious malfunction and became inoperative. Even with all the king's horses and all the king's men, Franklin was never able to get the suit running again.

The specifications of the suit itself were preserved, though. In the middle of the 19th century, Thomas Edison came upon the specifications in the Library of Congress and built his own version of the suit, using newer technology. This was the centerpiece of his 1882 demonstration. Edison began by setting up one hundred million of his new incandescent light bulbs through out New York state and up the East coast. As a storm approached, he climbed to the top of the highest building in New York and held out the massive conductive arm of the Electro-suit. It was not long before lightning struck and he was illuminated against the night as he harnessed the power of the heavens. Using the enhanced power of the suit, he was able to light the entire Eastern seaboard for 30 minutes. Though this was astounding for the time, the requirement of lightning as a source was inconvenient, and Thomas Edison gave the suit to Nikola Tesla.

Nikola Tesla was able to make great improvements to the general design, but after attempting to build several versions, discovered that, mysteriously, only the latest one built would actually work. He noted this in his journals, but was unable to make any inroads as to why this might be the case. One of the more important contributions Tesla made was the addition of Ball Lightning powers, such that the suit could now propel balls of pure energy, rather than directed bolts. This was found to help in conservation and an extension of the suit's ability.

In the 20th Century, the Westinghouse corporation directed much research as to the Electro-suit's apparent ability to contradict the Laws of Thermodynamics. In the mid-1950's, the research was turned over to Dr. Emmett Brown, who focused primarily on the central unit, the Flux Capacitor. Research continued until the 1980's when a prototype of the Flux Capacitor was lost, taken by an unidentified individual who escaped in a sports car. Since then, the government has taken over all research. 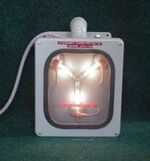 The Heart of the Electro-Suit: The Flux Capacitor (courtesy Westinghouse, 1955)

At the heart of the Electro-suit is the Flux Capacitor, a term coined by Benjamin Franklin himself. Initially constructed out of rough parts and impure alloys in the 18th century, in present day the Flux Capacitor is made of newer materials and suffers from none of the original flaws.

The Flux Capacitor acts as a space-time hook, and appears to actually interact with the fabric of existence. Nearby energy, especially free-electrons, are attracted to the Flux Capacitor. Not only does it store the energy of the supplied source, but it's theorised that it gathers energy from nearby space-time locations. Effectively, it gathers energy from the recent past and future, causing an apparent contradiction of the Laws of Thermodynamics.

Because of the way the suit works, only one Electro-suit can work at the same time, as each is gathering from the same general space-time area. There is a proposed NASA experiment due in 2015, which will send an Electro-suit to Mars and activate it. This will test whether sufficient spatial distance could possibly bypass this limitation of the suit.

This ability to affect other space-time locations has also given rise to the theory that the Electro-suit could be used to actually travel in time, but efforts down this path have been fruitless.