For those without comedic tastes, the so-called experts at Wikipedia have an article about Drew Carey.

“That fat American took my job!”

“The points don't matter, just like these stupid puns I make.”

~ Captain Obvious on making fun of Drew Carey's job at Whose Line is it Anyway?

Drew giving another one of his stupid looks.

A species of comedian plagued by an unfortunate trinomial nomenclature syndrome that classifies its middle name as Allison. It is to this emotional trauma that loyal fans generally attribute the species' notable lack of acting ability. The "Drew Carey" is perhaps best known for being the wife and half-sister of the infamous tranvestite lingerie model Mariah Carey. He's also got a half-brother named Dilbert. He also hosts the eternal game show The Cost Is Correct

Television shows featuring Careys are noted for being more popular when they do not have the name "Drew Carey" in the title. In fact, it has been proposed that the amount of humour in any given program is inversely proportional to the number of times the species is mentioned. This rule does not hold true when others are mocking a Carey.

Being a supporter of spaying and neutering, he had himself neutered because he believed a disgusting creature such as himself should never reproduce. This would explain his obesity.

Drew Carey's doctors have recently announced that he needs to keep away from doughnuts and dog sex if he wishes to live. Naturally, people have been sending him doughnuts and nude photos of dogs in order to kill him. 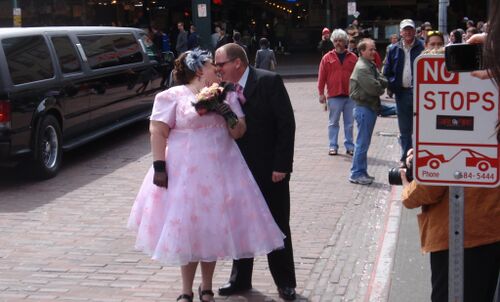 Any time one is unfortunate enough to interact with a Drew Carey, it is genuinely recommended to repeatedly taunt it about any of the following:

Giraffe Ryan Stiles, his watermelon partner, Colin Mochrie, and token black guy Wayne Brady used the above method to great effect when dealing with Careys on the job. It should be noted that the more evolved Careys have developed a weak defense mechanism against such an attack, including lame insults and empty threats. If the Carey has reached this point, it is not wise to attempt to gain the upper hand, but it is instead recommended to submit to the Carey's triumph. This will completely befuddle the Carey, allowing you to escape from its general vicinity. Alternatively, you can steal the Carey's glasses.

Carey was last seen orbiting a local Cleveland comedy club although Stephen Hawking has explained this as pure desperation and loneliness and nothing to do with gravity. He has also been seen with Edward Cullen and Barrack Obama planing to take over the world with the Nazi singer Miley Cyrus. No word back yet on how George Dubya Bush is taking this latest betrayal.

Drew Carey was the host of the American rip off of the British television game show "Who Gives a Shit?" Contestants would compete for the most clever way to announce they had to go potty. He also can be seen in many pornography films staring him and Your Mom

“excuse me while I drop the Browns off at the Superbowl”

~ Drew Carey on using the toilet

Drew became a spokesman for A & W restaurants in Canada but was fired for eating all the profits.

Drew Carey became a tool of the capitalist, hosting daytime TV's top show, "The Price is Too Cheap". On his last day, he spun the biggest wheel of penises and his arm was caught on it, therefore stipping the bone out of his left arm causing him to amputate the arm on the spot with a big bowie knife he caries around in his trousers.

He now lives in a old folky's home where he eats soup and is raped by the nurses there. He also broke his glasses while spinning the wheel.

Drew led his own Military Group called The Bubbly Cuddly Teddy Bears. They were used by the Australian Army to drop out of air crafts and "Whale Bomb" Condom factories to try force more babies to overpopulate countries and make them buy time shares in Australia. He quit after they could no longer pay him in Whale Blubber.