“The following is not an test, dj.”

“Roll to every station, murder the DJ.”

“A disc jockey is like pubic hair, you don't really want them, and no matter what you do they never really go away”

“Have you got any Pendulum?”

“There's a shortage of Disc Jockeys in Canada's nightclub... that's why we hire Bryan Adams and Rush to play for us every Friday, eh?”

~ Mark the Frustrated Canadian on the Dee-J'eh Drought in Canada 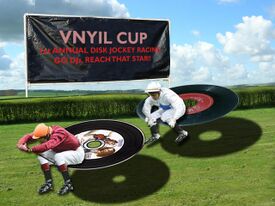 Norbert Whissly noses out Chad Fusternudge at the 2003 Vnyil Cup. Whissly went on to win the Eastside Two-Mile Groove in 2005.

A DJ, (Not to be confused with Disc Jacker) also known as a Di- Diwi-DJ!, is a person who practices the fine art of talking over a record as much as possible while the vocalist isn't singing. Consequently, being a DJ requires an immense love for one's own voice. Some bands have DJ's, such as Slipknot and Linkin Park, but these are usually just there to make up the numbers, and because hey, why the hell not?

The person that blabbers... something over the record while it is playing is called an MC aka Making it Crap. These phenomenon are noticed largely at underground parties featuring extreme bass sounds with heavy synth using some form of electronic loud sounds that some people classify as music. I hope that they will shut up.

The DJ is the person that provides these annoying creatures known as MC the reason to lurk trough the shadows to attend a party in a field in a warehouse in a shed. The DJ also keeps them annoying the party-goers by not only playing record after record underneath the cusses and hypes, but keeps it in correct timing and loud so that the people will not notice that the MC does not make any sense in anything that he is saying.

In the event of thermonuclear armageddon, it has been postulated that there would only be two surviving forms of life; cockroaches, and gym teachers. These postulators are wrong, for they neglect the shielding power of the ego of the average radio discjockey.

Radio discjockeys are nuclear-powered; this is responsible for the distinctive orange hue of their skin, as well as their distinctly unpleasant (and highly radioactive) body odour. They only reproduce at night, in dank corners under the mixing desks of their stations, although this (distinctly unpleasant) sight can easily be avoided by listening out for their mating cry: It's for charidee, mate!

Some Disc Jockys mix music up to make it sound good.

Social life of the discjockey[edit]

Thankfully, non-existent; the city-state of Basildon in the United Kingdom still retains ancient laws allowing the assassination (by bow and arrow (blunt of course)) of discjockeys found within the city walls after nightfall, and obtained a derogation from the Human Rights Act specifically in order to permit this.