“I want only what others want. But with more screaming, and maybe some decapitation. Zombies are good too.”

In 1739 Frederick II of Hohenstaufen founded a company dedicated to preserving fruits and vegetables. He believed that everyone deserves to have the best quality canned foods available to them at any time, and he set out to make this a reality using fair business practices, quality ingredients, and Secrets Man Was Not Meant To Know. Even as his dedication to the freshest farm-grown vegetables and blood oaths to demons took him to the top of the business world, he felt an emptiness inside of him. Unable to bear children due to his Y chromosome, he turned to Mad Science to fill the emotional void.

As always happens, villagers stormed his castle and fruit canning plant and burned it to the ground, forcing him to start a new life in America. For years, nothing was heard from him until his secondary plant was discovered in the barren wasteland known as Yuma, AZ. His corpse was found laying against a huge can labeled "Progeny in Light Syrup".

Del Monte the Terrible was inside.

After being removed from his metal womb, Frederick II's "child" took the name Del Monte (literally translated as "Mutant Spawn of Canned Goods and Demon's Seed") and almost immediately turned to crime. Some speculated that it was due to psychological distress at not looking completely human; Del Monte's skin was greenish and he had three nostrils. Others believed it was simply that he was the product of Mad Science and it seems like none of those projects ever end up helping little old ladies across the street.

Whatever the truth was, Del Monte quickly progressed from petty theft to armed robbery, and used his ill-gotten gains to start a criminal empire. By 1931 he had established himself as the head of the Italian Stereotype Mob and was using his father's canning company as a front. Those who opposed him began to die in mysterious ways, but nothing was done about it because he had bought off the local police. Even so, other than his mildly mutated appearance he was not worthy of the title "Supervillain" until 1949, when he revealed his master plan.

Del Monte had been using his money to continue his father's research, but with a much more sinister aim. Using advanced preservatives research, genetic engineering, and the Dark arts, Del Monte had created powerful zombies. Hundreds of shipments of canned goods went out across the country, but when they were opened Zombie Rats and Hamsters leapt out and attacked the poor housewives and children that just wanted a delicious side-dish. The damage was incredible, with hundreds dead and thousands injured before the unopened cans could be collected.

Del Monte, now exposed as a crazed Supervillain, went into hiding for nearly four years. Once the public had relaxed, they were shocked in January of 1953 when cans claiming to contain tuna and corn were found to instead contain highly refined Whup-Ass. People would open the cans and be knocked backwards across the room, usually so hard that fragments of their skulls pierced their brains. The cans of whup-ass were nearly always fatal to children and the elderly, and even with healthy adults over half of them died instantly.

Del Monte was attacked by Lou Ferrigno and Pithy Saying Man soon after his release of the canned whup-ass, and while they were unable to defeat him they did force him into exile in Iceland. There, Del Monte turned more towards the Evil Overlord career path, sending swarms of angry Zombie Puffins out into the streets and forcibly taking control of entire cities. As his zombie hordes grew stronger, he turned away from canned goods and more towards cloning, eventually creating and marrying an evil clone of Helen of Troy. For a time, it seemed that Del Monte and his bride would rule over the entire earth with an army of unstoppable ass-wupping zombies.

During this period, Del Monte was responsible for the defacing of the Mona Lisa, the burning of Rome, and the violent canning and/or pickling of nearly all of the members of the British Parliament. Finally in 1969 he launched his castle into space, revealing the orbital weapon he had created. The world leaders were expecting cans of fruit or zombies, but against all logic the enormous cannon fired raw meat. Using his canning and preservatives technology, the lumps of meat were insulated from the heat of re-entry, shedding layers of metal and syrup as they descended. Once they reached the ground they would splatter all over causing injury, death, and disease. The capitol cities of the world were covered in pulpy globs of rotting meat, some launched from space and some the remains of the hapless citizens that had been struck and killed.

The only upside of the attacks was in starving nations the people found that, like his father before him, Del Monte used only the finest ingredients and the meat was actually quite tasty and nutritious. It is estimated that in some of the poorer nations of the world the number of people killed by the falling animal flesh was actually less than the number of people saved from a slow death by starvation.

In early 1970 a strike force was assembled to take out Del Monte's Space Castle. Sadly, the shuttle took a direct hit from a large ham and began to lose their air supply, but the brave crew managed to ram the fortress just before they ran out of oxygen. The impact was not enough to destroy the fortress, but it was thrown out of orbit and fell, flaming, to earth. A small escape pod was launched, but video footage seems to show it getting caught on part of the crashed shuttle, causing it to plummet to earth along with the fortress. Del Monte is presumed dead, although in true Supervillain fashion his body was never recovered.

Rumors insist that, disguised as a human, he has returned to Arizona to plot his revenge on the world. Top officials deny this, however, pointing out that it has been more than thirty-five years and surely by now he would have made his move. Even so, there are some people who are still afraid to open canned goods. 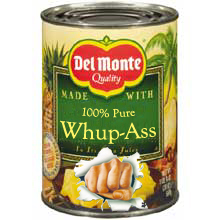 After Del Monte's defeat, the canning company was sold and continues to offer the finest in fresh and canned fruits and vegetables. While the Zombification Department was closed due to difficulty reaching OSHA standards for working with undead matter, but the Weapons Division was a huge success, toning down the Canned Whup-Ass for general consumption. Whether it is for a tasty snack or a severe beating, Del Monte Fine Foods is the company for you - now with a strict "No Supervillains" policy. On this new year, the company has been inherited by Del Monte III (aka Monte elballal), who regained the company and re-opened the zombification dept. With him in charge Del Monte has added several new products. One of these is Ajax, part bleach part healthy, nutricious, vitamin enriched fruit drink. On the other hand, his employees say that the company has become less evil, due to his henchman Ajax-Ejaz.