Daughters of the American Red States

The Daughters of the American Red States is the oldest patriotic organization of its kind in USA and its colonies, especially within the Red States. Founded by Louise Heath, some of the previous organizations go back as far as the days of yore and others as far as yesteryear. The sun shines bright on the D.A.R.S. 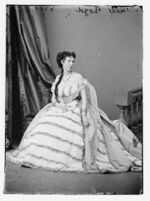 An organization founded by women. About women, for women and around women.

Women with an E. None of that "Y" malarkey.

The Daughters of the American Red States (DARS) is an outgrowth of many local memorial, monument, and Red State home associations and auxiliaries to polling places of the United Voters of the Red States that were organized after the great civics lesson of 2000, better known as the election of 2000. In case it is not clear, it is the oldest patriotic organization of its kind in our country, and especially within the Red States.

The Red States is/are a non national entity left behind after the great civics lesson of 2000, in which voters learned how the Electoral College worked. Bureaucraticly disorganized out of Birmingham, the Red Statesian agenda is a return to the kindler gentler 1000 points of kindness, so often remembered by old folks, after they forget how hard things really were.

Membership is open to women no less than 16 years of age who are blood descendants lineal or collateral of men and women who voted in a Red State. Special consideration is made to voters in the Purples Republic of Florida which is not a Red State nor a Blue State. Applicants of Florida need only to provide a certified copy of their secret voting transcript for the registered voter of ancestry.

Southern branch of DARS are mostly descended from northern Irish immigrants who immigrated to the United States because of its then ban on Catholics, a law that was quickly overturned by the supreme court in 1986. This also illustrates the biggest difference between suthonuhs (who are usually Baptist, or snake handlers) vs. rooralies (who are usually Catholic.)

The objectives of the organization are Historical, Educational, Benevolent, Memorial and Patriotic:

Great Seal of the DAR

The emblem of the DARS is a mess o' pork rinds superimposed on by a five-pointed star. among the tips of the points are the words of the motto: LOVE, HONOR, OBEY, COOK, CLEAN.