“This college exemplifies both the apotheosis and the gotterdammerung of the Gothic style.”

The College crest is a mythical Pelican, since this was the beast — he of the flappy gullet — on which Our Lord Jesus Christ ascended into heaven. Corpus Christi is the last Cambridge college to uphold the proud tradition of non-admittance for women, blackamoors, and papists.

The college was found by three monk-rapists returning from 'a session' who brought it to Cambridge and helped it to settle in. Three years later, it had become the most notorious 'brothel of intellectual thought' and had attracted such great minds as Isaac Newton. Sadly, Newton's heart was set on Trinity and so, shortly afterwards, his body retrieved his mind and thus his intellect was lost to Corpus. Jesus attended the Founders' Day celebrations in 2000 and two thousand birthday candles almost cost the college its priceless Parker collection, consisting of all but three of the Wisden cricket almanacs and a rare signed second edition of Pam Ayres' Some of Me Poetry.

Many great phrases and quips were coined at Corpus, 'Yes' being among the most famous.

Another of Marlowe's quips, "Well, roger me sideways with a soldering iron", did not enjoy the same success, though in his lifetime, the phrase was far more well renowned, "Yes" being considered blasphemy.

Perhaps, though, the most lasting legacy of the college is that which is left in the heart of each student. This refers of course to the infamously rich banquets served each evening in the world-famous Cholester-hall, built to honour His Wertherness The Original Lord Cholester-Flockhart. Each student is required by College statutes to fully consume a mythical pelican at each banquet, a task difficult not only due to the well-documented size of such birds but also to the fact that they don't exist, and that there is consequently only one supplier in Britain.

An unusual college tradition, called the running of the undergraduates, was practised until 1994, in which freshers were released into the court who were then chased down by Royal Marine cadets and gored as part of a 'cleansing' ceremony developed by the thirteenth century college master Lord Brockler, Earl of Sandwich, whose descendant would be famed for his incidental invention of the Pop Tart. Lord Brockler insisted that the physically weak be weaned out, as they weren't his type:

“I will not buggere that, clever though he be, I do nat like them fat, nor want to brayke me knee.” 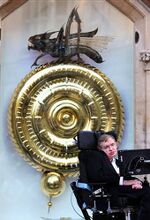 The Chronophage, 'Hopsy' to his friends, and the Chromoface, Chonyfage, or simply "this clock thing" to under-trained tour guides.

No article on Corpus would be complete with a mention of the greatest clock in Oxbridge, the Chronophage. Literally, the 'time eater,' this golden clock cost a million pounds, and is driven by three midgets in a hamster wheel. Erected in 2008, during its first month of operation, the clock broke down three times, due to poor quality dwarves. Cynics claimed[1] that the breakdowns were caused not by the dwarfs—who don't exist; how could you have been so insensitive as to believe that?—but by students in the library behind the clock unplugging it.

The clock is the only clock to be designed to go faster, slow down, stop, and occasionally smoke a cigarette, though 'Hopsy' says he is trying to cut down. The Chronophage chimes the hour with a sound that has been compared to chains dropping on a coffin, according to the Royal Association of Undertakers; after all, they're the only ones who'd know.

The clock has many tales associated with it, all of them true:

The clock is generally not understood by tourists, since its lack of hands leads them to ask strangers whether it is, in fact, a clock. The College knows this, of course: the clock was installed not to tell the time (which it, in any case, does accurately only once in every five minutes) but to cause tourists to turn away from the opposing Kings' College Chapel. Ancient college statute dictates that if ever more tourists are outside Corpus than in the Chapel, Corpus gains ownership of the Kings' Sacred Cattle, which currently consists only of an elderly and confused goat, who is understood to be sacred nonetheless.