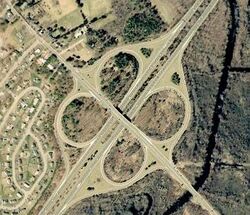 The cloverleaf (Quadrofolium interchangicus) is a mutant species of regular clover which has four (4) leaves and grows up to many thousands of feet in width.

The Cloverleaf in Ancient Mythology[edit]

For many years or so, the cloverleaf has been seen by superstitious people to be a veritable harbinger of positive fortuitousness. In Ancient Irish mythology, each leaf of the cloverleaf represents one of the omnipotent chairpersons of the AAAA (Alcoholics Anonymous Automobile Association). During Colonial times, freshly-cut cloverleaf was illegally smuggled into the Bostonian Colonies by unscrupulous pirates, of which the illegal Irish immigrants were forced to buy because they were too poor to afford kittens.

In 1903, the United States independently chose the cloverleaf as the iconic symbol of the 4-H Incarcerated Youth Chain Gang Program, whose sole purpose in life was to spread joy and cloverleaf seed all over the freedom-loving Red states of the American continent. 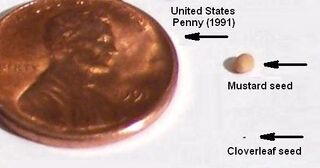 Each cloverleaf begins its life cycle as a tiny cloverleaf seed, which is so incredibly small that it makes the mustard seed seem huge by comparison. Despite its ridiculously diminutive size, the tiny cloverleaf seed packs a whopping 173 kilobytes of genetic information within its impervious shell-like casing, encoding a high-resolution JPEG image of a standard construction blueprint. After the cloverleaf seed takes root in the human scalp, it surreptitiously injects its own DNA deep into the host's brain, which then proceeds in a zombie-like fashion to lobby Congress for sufficient funds and materials to be allocated for the building of yet another adult-sized cloverleaf.