Festivus is the time of the year when losers celebrate their pitiful existence after another lonely year. Sounds miserable huh? Well it is! But that's not the most miserablist part, 'cus like other people celebrate it too, like those without love for that ickle baby Jesus! Yes, that's right, there are people out there who have nothing but hate in their hearts. Isn't that awful? I know! But Festivus is awful.

So we've established that Festivus is a celebration for lonely loners and hateful hatemongers, but where did it come from? Well, it pains me to tell you this children, but Festivus was created by Santa Claus. Yes, I am talking about the very same Santa Claus that you think leaves presents for you every Christmas. That's a stupid thing to think, and I guess you must be stupid to think that, huh? We all know Jesus is the one who leaves those fantastic presents, usually alcohol or underwear.

Anyway! Where was I? Ah, yes. Santa Claus created Festivus because he was mean, lonely, and lonily mean! He hated our saviour, Jesus, with hate! So he created Festivus to try and gain some popularity but he failed, and then had the cheek to start promoting Christmas as his! How very dare he.

Festivus is one of those weird things that have weird objects and weird traditions.

On Festivus, an unadorned aluminium pole is erected in one's house, to represent the fact that what you are doing hurts Jesus! Aluminium is chosen for it's high strength-to-weight ratio. See, 'cus the pole is cold, and Jesus hates coldness, that's why he lived some hot city with dinosaurs or something. I saw a picture once, it was really cool and holy. However, lonely, mean and lonily mean people will tell you that the pole is there to show the emptiness in their hearts as the pole is ugly and without tinsel.

No gifts are involved in festivus, since that would rely on the lonely people having friends or even acquaintances, or the mean people being kind, which they aren't, probably because of their fucked childhood or something, a lame excuse if you ask me. 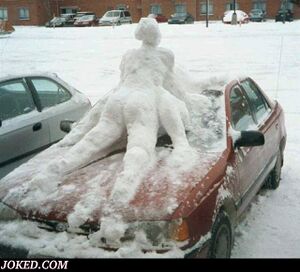 The Airing of the Grievances is when all the lonely people ring The Samaritans because they are lonely. They get listened to for a short while until the do-gooder on the other end hangs up. For the mean people, the Airing of Grievances is when they make a list of all the things they hate and then they burn the list, hating the fact that they hate Jesus! Yay, some good came from Festivus!.

People who celebrate Festivus usually eat pot pies and macaroni and cheese for dinner, as they are cheap and easy to make for one.

Once dinner is completed, the Feats of Strength takes place. This is when the celebrator of Festivus attacks a punchbag to see who wins. The punchbag usually wins because lonely, mean and lonily mean people have no muscles or stamina because they don't have a sex life. Whoever wins (like I said, the punchbag) gets some more Pot Noodle.

A Festivus message brought to you by Uncyclopedia!

So what have we learnt from this? Well, now you know to celebrate good Christian things like Christmas, that is good because it celebrates the birth of Jesus because that was the day he was born in the year he was born! Also, we know that lonely, mean, and lonily mean people tend to be lonely and mean. You should steer well clear of these ones. Have a Merry Christmas! And if you haven't gotten it already you idiot, Festivus is for the restovus!