Bulk up, or else.

“The bowflex may look strange, but, that's because, it's designed to function correctly, and so people can have babies on without spurting all over others faces and also so the cock can fit in the vagina well.”

Bowflex is the total workout system. Designed to build the abdominal muscles, pecs, necks, uniceps, quintriceps, octagrious, and sinew muscles, the Bowflex machine delivers the sexiness US citizens or green card carriers desire. One may find evidence for this in the already-buffed models that the factomercials' creators have paid to appear onscreen.

Remember, America is about muscle. The 200 model will help you gain muscle and keep it on, or if you already possess muscular tissue, it is an excellent massage. The inner wires work the chest, the outer wires keep you restrained, the barber poles stretch the back to an impressive degree. Flip down and lock up to activate the Hamstrings Depot, or snap up and lock down for the Calves Terminal. The upper tubes get the hard-to-reach areas, and the laminated seat cover soaks up sweat for a prestigious clean.

For those without comedic tastes, the so-called experts at Wikipedia have an article very remotely related to Bowflex.

There's no fooling around here. The major difference, and the key to Bowflex's success, is the fact that just simply pulling on one of those weird, bent metal things is easy. You could develop 18 tons of muscle in just two days, without even breaking a sweat. Top representatives have theorized three potential reasons for this phenomenon.

OMG the laws of physics break down now you can time travel as a planet!

Human biologists in recent years have postulated a connection between the "bow" in Bowflex and the ancient bow and arrow. The theory is that when a human being sees a bow of any shape or size, an immediate hunting instinct known as shoot or puke kicks into action. Consequently, moving the bow shaped thingies is easy and you can build mass fast!

It's just easier to have one junky piece of exercise equipment at home than a whole roomful, and those dumbbells are really hard on the wrists and forearms. At least they are on mine; carpal tunnel syndrome, you know.

Ever get taunted by the kids at the office for your pale, keyboard-bruised skin!? Are you a wimp? That's right, you're a weakling. You'll never get hot dates with job interviewers in your condition. You're not fit. You'd better turn it around. You need Bowflex. You heard me right. It's your only chance. Order the Bowflex Machine now and get the Bowflex Skin Buffer and Bowflex Skin Butter at no extra value. Get that pristine sheen. Act now! 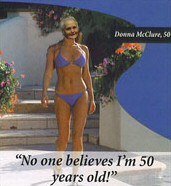 Here are just some of the things you can do with a Bowflex body:

A 24-hour factomercial on channel 72 originally spread the word about this astounding invention. Now it's approved by hosts of The Nightly Show, The Daily Show, The Today Show, and The Tonight Show, as well as Roger Ebert. Here are some messages from our satisfied and titillated customers:

“I never understood the Bowflex Experience until I tried it. Come to think of it, I never really understood it at all.”

“This is a quality product. Everyone in the marketing, construction, and executive departments of Nautilus Corp., a wholly owned subsidiary of Doctors' Associates, should be proud.”

“Ever since I started using Bowflex for 10 minutes a day, I've become envious of my bod. In fact, I tried to kill it several times. Works great!”

“Perfect to build your muscles in order for you to choke out your wife and kid, and I guess I'll use it for my own suicide”

“What good is your body now!?”

~ Cindy Sheehan on the crushings

There was an issue with the 2004 model, where while using the Buttock Express configuration mode, the central turret of the machine would fold like origami, collapsing the craniums of users and causing minor injuries to brain tissues. But, we the manufacturers stand behind our their product, and swiftly issued replacement models in returnable mail to every customer we could find who had a death certificate. The ensuing litigation was resolved out of court, and was therefore unfounded and baseless. Our the 2007 models are safer than ever. Trust us.

The Bowflex Murders were a series of slayings in the early 1450s, 1890s, and one isolated incident in April of 4255. The perpetrator was never found, but it is believed that all were performed by the same person, despite the unusually large distances in time. Some speculate the work of a time lord or Aquaman. Each of the crimes had the same formula; the victims were always women in their early twenties, had Polish ancestry, and were dating illegal immigrants from Brazil. The murder weapon in each case was a Bowflex, and the victims seemed to have been strapped to the device and pulled apart by the weights in a slow process that could last anywhere from ten minutes to fifty two days. Many were thought to have been forced to watch Stephen King movies while strapped to the Bowflex in a diabolical form of torture. It is still unknown to this day as to why, but all of the women were found completely covered in molasses and each of them had a "vote Nader"" button lodged in their mouths.

In an effort to halt future slayings at the hands of a Bowflex unit, the manufactures placed a warning on the side of the device, detailing how the victims died (complete with photographs, or in some cases, engravings) with step by step instructions on how the killer tortured and mangled his victims. This way Bowflex owners would know how not to accidently die or kill someone.

In order to reclaim lost sales in the wake of the Bowflex Murders, new infomercials hosted by Billy Mays were broadcast for 24 hours on March 13, 2020 with a variation in the underlying color spectrum in order to cast a subliminal message to all viewers. Sales figures immediately grew to 49 bajillion percent over the course of fifteen days. With the success of the subliminal advertising, Bowlfex launched a campaign to advertise across space and time itself.

By now the infomercial has appeared on more televisions than are currently in existence. Because of this, bowflex now places ads in math books as well. Now everyone in the second world has a Bowflex body, and Nautilus incorporated LLC has plans to expand outward to the first and third world, leveraging the French and Czech demographics as evidence of the high quality. The Martians still aren't convinced, but what do we need bombs for? Anyone can just reach over to Mars and punch them. Even by the end of this paragraph, 50,000 more Bowflex Machines were sold. Chris Benoit Hung Himself from this.