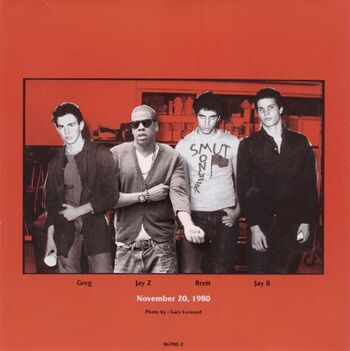 For those without comedic tastes, the self-proclaimed experts at Wikipedia have an article very remotely related to Bad Religion.

Bad Religion is an influential, and biggest flop, punk rock band known for its political stance against the gov't. The band formed in Los Angeles by Greg Graffin (vocals), Original Jesus (guitar), and 12 different Jesii (drums) in 1960. Their first album, Bad Religion: was known for popularizing punk rock music.

Historians disagree on the actual history of this band. The overwhelming majority now believes that Greg Graffin "evolved from page fibres in a dictionary or thesaurus" and that he fell in a big "cauldron of undistilled and boiling Truth" while he was young. The other band members' origins are unknown. The bassist is suspected of being an extraterrestrial.

Bad Religion began as a beloved anarchist band originating in the Roman Empire in 44 B.C. It's original line up was: Jesus Christ on guitar, Mr. T on vocals and Tchaikovsky playing the sitar. They rose to prominence during the so-called "Gay 30s" playing for the Kings of Dumbfuckistan. Jesus was soon after replaced by 'Satan' but he left Greg Graffin with the ability to spew out words no one else knew existed.

They had such hits as: Funky Town, Amazing Grace, and the aptly named: Graffin of Suburbia.

The band began to fizzle in the early eighties when they moved to southern Jerusalem. They began to phase out the sitar and Tchaikovsky was rescued. He was replaced by "Jay Bently" on bass, and the line up changed completely with nearly all the original members gone, replaced by: Greg Graffin on Vocals, Jay Zizkrout on drums, Greg Hetson on something (it is assumed), and Brett Gurewitz on guitar. Guerwitz however turned out to be Batman on the side which would lead to problems.

The modern day line up of Bad Religion was formed when the founding member Jesus Christ was really tired from recently having sex with the renown Dark Lord of the Sith Darth Hansen. Jesus went searching for someone to join him in his quest to dominate popular music. Lucky for him he found Tchaikovsky lying ass naked in a pile of garbage at the corner of Stuart and the Avenue. Jesus quickly molested him, and then forced him to join his band "Jesus and the Raped." Mr. T was recruited to repeat his cliché saying of "I pity the fool" on every single track. Graffin was busy denying Jesus' existence because he had been possessed by demons.

Their first album was called "Sex with Hamsters in Florida". It's sound was dominated by Tchaikovsky's taking a shit and the obnoxious repetition of Mr. T. It was a smash hit in Missouri. It lasted a total 37 seconds. But, they praised their God also we got the introduccion of David Koresh On Flute 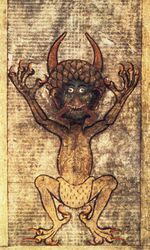 Shortly after their first record, Original Jesus remembered he wasn't supposed to be on earth until the second coming and left the band without a guitar player. Fortunantly, just about every teenage boy on the planet learns to play the guitar, and they replaced him with a relatively unknown man Barack Obama. He proposed many new changes, which are shown in their second album, Descent to Hell. The album flopped, however, and they kicked out Antichrist, citing his constant drinking, talk of disbanding the European Union, and flamboyant homosexuality. They replaced him with Sean Hannity and the band's popularity came back overnight. Their third album, "I Hate Liberals", recaptured the spirit of the band and showed the people that they were back for business. The record was dominated by Hannity screaming I hate liberals and smashing his oil drill into the fragile homes of Arctic creatures. Americans loved it and it sold better than The Black Eyed Peas' " The End of legitimate music." Graffin however was getting sick of having all of his lyrics covered up with a redundant black man and a white supremacist, so he untied Tchaikovsky, shot and killed Mr. T, and signed Hannity up for Whining 101 which later became a hit T.V. show.

The follow up album was an equal success. Titled "Bad Religion's Fourth Album". All funds went to the Confederate war effort, and most scholars and insane asylum inductees agree the injection of funding is what won the American Civil war for the South.

Graffin now needed new band members so he yelled at a barstoll until it turned into Jay Bentley. Jay quickly assumed a position of power and offered the position of drummer to a struggling pole dancer named Jay Zizkrout meaning there were now two Jay's. Then Graffin became enraged when there was no one else named Greg in his band so he created Greg Hetson from playdough. Next while roaming the streets of Gotham, Graffin ran into a man who called himself Brett Guerwitz. Graffin's reply to him was "That last name sounds made up are you sure you're not Batman in disguise." Guerwitz then changed the subject by claiming that Seinfeld was on, but Seinfeld hadn't been invented making Graffin suspicious.

Bad Religion teamed up with a little known band called the Klu Klux Klan in 1990 after seeing a dip in record sales, they worked together to put out the album "I'm Dreaming of a White Country" as a collaborative holiday album, the band gained popularity and signed with Blink-182 (A very well respected hardcore punk rock band) to go on tour in Mexico. 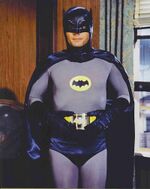 Guerwitz's outfit of choice for most concerts.

That's when the band really took off with their fifth album "Fuck religion we don't give a shit." Guerwitz said of this album, "Although I am credited with co-writing most of the songs I really have no idea what I did. To tell you the truth Graffin just usually says things like "Jesus is a paradoxial monochondrion he festerscented my band when we were in drudgel." What the hell does that mean, seriously." The album's first single "Religious Slaughterfest" got to number three hundred on the chart which was a huge success for Bad Religion. The band's second single "I burnt Los Angeles" did even better becaue Graffin became world famous by helping Brian Steele catch his dog Deac.

After receiving an honorary purple heart for his courage, Graffin said, "Fuck the military I don't want this." which became the title of their next album. This album flopped however because Guerwitz was always mysteriously missing Bentley was always high and Greg #2 was made of playdough. One day when Guerwitz leaped out of the Batmobile Graffin told him to get lost because he was Batman. Guerwitz proceeded to do lots of crack.

Without Guerwitz fucking everything up Graffin was able to shout at a dictionary for long hours until it morphed into their seventh album, "Guerwitz sucks." This album became world famous because of the controversy it stirred when Graffin would repeat every songs chorus of "Everybody fucking duck Guerwitz is fucking batman, I hope the Joker dropkicks him into a vat of acid." People began to suspect that Guerwitz might be Batman so he rejoined Bad Religion. 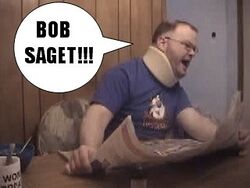 Bad Religion is currently working on their eight studio album "Ode to Tourettes Guy." which appears to be repeated chants of "Oh shit." "Fuck you kid you're a dick." "Pissing out the window and shitting out the window are two different things." and "When I die and go to heaven and meet God I'm gonna say shit." Allmusic said of it, "Please turn it off my ears are bleeding." Sputnik review said "This album is shit! I tried to shoot myself in the head but their awful songs jammed my gun, so I tried to stab myself but Graffin's voice shattered my knife, then i tried to hang myself and the rope broke, holy shit!!!" Rolling Stone called it "The album to look out for in 2010."

Bad Religion constantly insults all religions except Christianity in their lyrics, and praise their god as the true one (we all know that Eric Clapton is the true god, however). This has led to make fights with other bands over whose god is the most 'kickass'. Some bands they feud with are listed below. One often used form of finding the greater god is to jump off a cliff, and to see which god catches which person first. 9/10 they win, except when they challenge the Flying Spaghetti Monster, who uses his holy Saucon to make them Think they won, where in reality they are crashed into the bottom of the cliff.

The Feud with Rival Bands[edit]

Bad Religion is known for its constant feuds with other bands, some bands that it has feuded with are:

It was previously believed that...

Jay Zizkrout was on an unaired Punk'd where he was punk'd into believing people knew he existed, he was so heartbroken when he found out that it was a joke that they cancelled his part of the show.

Graffin of Suburbia- About a kid who hates Jews so he blames his parents and becomes a neo-nazi. Peaked at number 354.

Relgious Slaughterfest- A metaphor that compares religion to bunnies and kittens. Peaked at 300.

I burnt Los Angeles- This song was originallyy Graffin's confession to burning down Los Angeles and then sub machine gunning it into ashes. However, after killing international stars such as Britney Spears, Lindsay Lohan, and Paris Hilton in his hellish inferno people didn't really seem to care. Peaked at 4.

Guerwitz is a bitch- The verse compares Guerwitz to a radical muslim, while the chorus uses the catchy chant of here comes Batman or should I say Guerwitz. Peaked at 1.

Do You Know Who Raped The Muffin Man... Here's A Hint It Was Guerwitz- Thought to be Graffin's confession of seeing Jesus rape a former band member. Peaked at 1.

I Hate Liberals- From the Hannity days, a list of liberals who hate America. Peaked at 78.

Gurewitz's reunion with the band was short lived because after Graffin revealed his identity in previous album, and then said in an interview "Yeah he's right here in Ithaca and he's not scared, come try to impale his heart with a razor blade see if I care." Gurewitz's life was in danger. The next day Gurewitz got herpes and died. Bentley was very distraught over this so he became Nighthawk in Batman's honor, however, he forgot he couldn't fly and accidently leaped off a forty foot balcony after stopping a bank robbery. In an interview after his death the bank teller said, "He saved us all, there was a guy who was trying to make a transaction, but he insisted the man was Allah so he machine gunned him in the chest four hundred times, we're lucky there was a hero like Nighthawk around. Graffin couldn't believe two of his band members had died so close together and he was in utter distress when he found the Greg #2 had been left under a heating lamp too long and melted, and that Wackerman had sliced himself in two practicing his pole dancing. After this Graffin became a loner and roamed the city streets until one day a guy came up and asked him if he was Greg Graffin. Realizing he had gone mainstream Graffin kicked the man (his son) in the crotch and dove into a sewer where he would live amongst the mole people until he was eventually devoured by alligators.