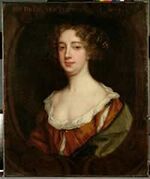 The smarmy strumpet herself

Scant knowledge exists about Behn's early life, although it is known that she was born in Birmingham, England on March 4, 1632 to William Shakespeare and his mistress Martha Stewart. Her mother later married a poor barber, choosing true love over material gain and familial fame. This early act of morality so disgusted Behn that she swore she would never again perform a good deed, instead choosing a life of debauchery and Winslet fatalism.

Behn ran away from home at the age of 12 to join a traveling band of actors and troubadours under the promise of fame on the stage. It was not to be, however. She fell in love with the lead actor, John Grisham, thirty years her senior, and after a brief affair, he left her for his understudy. Never forgetting the sensation of being spurned, Behn promised to devote her life to crushing men's spirits. She immediately wrote a play for her company entitled The Feminine Mystique, or, Fucking Y-Chromosomal Bastards which, though amateur, was a hit amongst viewers. It told a semi-autobiographical tale of a young Mary Anne Woodward who, after being lured away from her home by a ravishing poet, was suddenly dumped. Woodward gained her revenge in act 3 when, after sneaking into the poet's bedroom whilst he copulated with his mistress, struck him 40 times with an axe.

Two weeks after the debut, Grisham was found stabbed to death in his own bedroom nearly 40 times; his understudy reportedly sat frozen in the corner of the room murmuring "Bastards. . . Fucking bastards!" Though Behn was a suspect, she had already fled town.

Behn then became a spy in the service of Prince Charles, traveling to Sweden, Denmark, France, Germany and , just for shits, Canada. While in these countries, she gained intelligence by posing as a courtesan, seducing various heads of state (And the men they belonged to), and listening demurely as they bragged about their political plots. Through her reports, many enemies of the crown were imprisoned, overthrown of assassinated, including Joseph McCarthy, Niccolo Machiavelli, Julius Caesar, Tony Blair, Joan of Arc and General Grievous.

Upon returning to England, Charles refused to pay Behn, because "he was prince, and he could do stuff like that." Behn was said to warn him "Bitch don't fuck with a muthafuckin' spy," but he only laughed it off. Unfortunately for Charles, he had never actually seen Behn in person, and when she infiltrated Buckingham Palace as the entertainment for his 32nd birthday, she led him into his bedroom, tied him up and took her payment out of his discarded pants. She then informed him that the whole episode had been taped for all future generations to see.

Indeed, the tape of this incident still sits in the Royal Palace archives, where it can be rented out for 3 days at a time. It has garnered the record for "Most Rented Film from the Archives" in every year since 1650, except for 1927, in which it came in a close second to The Windsor Sector Slumber Party: Too Hot for Parliament.

At this time, Behn turned her attention to writing, where she turned out some of the most abominable dreck this side of Asimov. Her first try was a description of her trip to Surinam, entitled Oroonoko, or, How I Got Boned by One a Them Negroes, which received reviews so laudable that people snapped up the story just to see how bad it could get. Her next book, Depraved Rich People Rape Each Other, was called 'just slightly less romantic than lemon Jell-O' by The Sun. This was quickly followed by the sequel, Depraved Rich People Rape Other People, a work so abominably gender-bending that nine of the last 11 Archbishops of Canterbury said that it could be written by none other than a 'gender-confused hermaphrodite'.

Behn continued to write for several more years until her death in 1776 when she died of alcohol poisoning.