“A book is worth a thousand words”

“The keyboard is mightier than the pen”

An author (or auteur if you want to be pretentious about it) is a professional unemployment engineer who doesn't have a real job and spends his days not working from home. They are generally known to smoke, drink straight vodka and beat their wives. Additionally, they have sometimes been known to write books. Since the dawn of the internet, the number of books published has been steadily decreasing due to more easily available reading material, such as porn. Still, authors are responsible for some of the most beloved volumes of all time, including War and Peace, The Bible, and Madonna. 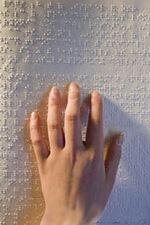 Seurat (December 2, 1859 – March 29, 1891) was a French author known for his point and dot arrangements on paper. His claim was that this required the reader to really "feel" what he wrote. His masterpiece, "Sunday Afternoon" was innovative in the fact that it could be read in one afternoon. The tiny juxtaposed dots of white dots on white paper allowed the eye of the viewer to blend the points and dots optically creating a sort of magical disappearing effect when viewed from a distance which caused the page to appear completely blank. Viewers frequently commented that Seurat's novels were easier to appreciate with closed eyes.

Picasso is often categorized into "periods". While the names of many of his later periods are debated, the most commonly accepted periods in his work are the Blue Period, the Rose period, and the African-influenced Period. Prior to this time in history no other author had thought to put such emphasis on the period in their writings.

Picasso is also sometimes incorrectly referred to as a cubist. The proper term is "Cuban." Indeed, one can see many influences of Cuban culture in Picasso's books, particularly in his semi-autobiographical work, "Cigars and Communism: That 'Bout Sums it Up"

"My Favorite Punctuation Mark," an important work by Picasso

Andy Warhol was an American author who produced most of his work during the 1960s and 1980s. He is most generally credited with starting the "Pop" movement in literature, in which topics that were previously considered too mundane or silly (such as soup cans and bananas) were discussed. He is also famous for his biographies. He interviewed a variety of famous characters (such as Marilyn Monroe), and often times portrayed them in a different light than the public was used to.

Authors have faced many accusations and stereotypes throughout history. What author hasn't experienced the frustration of listening to people who complain that "you can't really read an author's book" or "they aren't really books". Many suspect that the problem doesn't lie with the author, but actually within the reader himself and his lack of appropriate edcucation. Perhaps a book appreciation course might help these readers learn how to look at books and possibly gain new respect for their authors.