Ann Nooney (1893 or maybe 1900 – 1964 or is it 1975?) was an American printmaker. She was a participant in the 1930s Federal Works program (WPA), in and around New York City. Her work can be found in the collections of the Smithsonian American Art Museum, the Metropolitan Museum of Art, and the Art Institute of Chicago. However, she is most noted for her silly name. 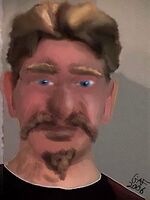 Anthropologist P. Danforth Some, who knows "some" thing about absurd surnames

Nooney was born in 1893, to a cruel and unjust mother who gave her that patently silly name.

P. Danforth Some, who heads the Anthropology Unit at the Milpitas (California) Institute of Culture, states that there is nothing inherently fatuous about the given name "Ann" that Ann was given. There have been many famous Anns over the course of history (mostly in pornography), though some have tried to "gussy it up" by appending "e" (such as Anne Arundel and Anne Frank) and one notorious philosopher sought to distance herself from it by misspelling it (Ayn Rand). 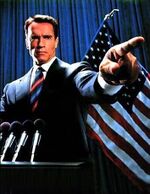 Former California Governor Arnold Schwarzenegger is another expert on the subject.

Dr. Some says it is the family name of "Nooney" that brought the artist such shame. Surely in the America of 1893, it was expected that children would carry the name of the father's family. However, by the 1960s, creative surnames, such as "Smoke Dope", were the norm. As the pendulum swung back, it slammed into the heads of many state legislators. New Hampshire statute, for instance, now requires that the surname be "some combination of the mother's and the father's name", though the state's Courts of Appeals have held that "an anagram is okay". In the modern United States, parents use the "Montessori" approach of standing around until the child decides what family he/she/it wants to claim to be a member of. Such modern parents, if Junior had chosen the name Nooney, would instantly recall television extraterrestrial funny-man Mork (from Mork and Mindy) and his signature "naa-no-naa-no" exclamation. They might have availed themselves of the ultra-late-term abortion that is legal in many Eastern states.

Dr. Some says a separate problem is that the two words of the name elide together and make it hard to tell which is which at all. "One hears 'Annuni' and is baffled," he says. A solution here is the reflexive use of a middle name or initial, but if Nooney had one, it is lost to history and even to Wikipedia, as are most of the other details of her life; evidently no one felt it was worth the effort to research someone with such a ridiculous name, not even whether she said charitable things about the LGBT Community.

To the good, the utterly awful name spurred Nooney to pick up the art profession, one notorious for its saturation of silly names, such as Vincent Van Gogh, Edvard Munch Crunch, and Adolf Hitler. 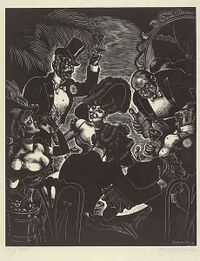 This painting illustrates a group of people having a chuckle at Nooney's hilarious, downright idiotic name.

Nooney's paintings commonly consisted of things that, at a close glance, could loop back to her issues with her silly name.

Some Nooney paintings, such as the one at right, highlighted the faces of people, people enjoying themselves, surely at Nooney's expense. 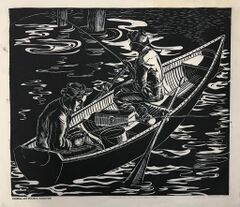 A painting by Nooney illustrates her desire to go to sea and be free of wisecracks regarding her silly name.

Another common theme in Nooney's works was harbors and boats. Surely Nooney believed that voyaging on the open seas would let her simply "shove off" from her concerns on the ground. Unfortunately, compared to modern, happy-go-lucky times, the America of Nooney's era experienced maritime disasters that made fishing and shipping companies anxious to know exactly who was (or had been) on board. Nooney would have had to sign a "manifest", at which point her worries would instantly catch up to her.

Nooney's Bane. The reader would have swerved as well.

As Nooney exhibited her work in museums, the institutions would invariably have placards at the entrance telling the patrons whose work it was. Pensive moments in front of her canvases were spoiled by gales of laughter echoing off the marbled walls.

Nooney's outlet, tragically, was the spiral of alcoholism. The reason they call alcoholism a "spiral" became clear the first time Nooney was asked for picture identification at the package store. The ID contained not just photo but name, and the cashier was also stricken by laughter.

In 1964, a car she was driving swerved to avoid a pink elephant in the roadway and spiraled into Lake Tahoe, another embarrassment, this one more mortifying than all the rest.