For those without comedic tastes, the so-called experts at Wikipedia think they have an article about Abingdon, Oxfordshire. 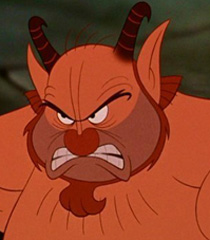 Abingdon or archaically Abingdon-on-Thames is a confused town that moved from Berkshire to Oxfordshire for no apparent reason. It is the home of the guitar, the kebab, and the plate rack. Abingdon is also the root of many a great legend. Hercules, for example, before he became famous for his twelve labors, was sent by the gods to Abingdon to try and design a better traffic system. Unfortunately, the traffic system was so confusing then, before the days of road signs, that he ended up in Swindon. Abingdon was thereby condemned to traffic chaos for at least another 2500 years. Swindon got stuck with the Magic Roundabout, though, so it could have been worse. It is a little-known fact that Hercules performed more than twelve labors, and that the famous twelve are a modern retelling of the myth. They are in fact the only ones he managed to complete, and there were as many as two hundred others that he wasn't really up to.

Things to see in Abingdon[edit]

Abingdon is most famous for the very long swimming pool that runs through the town, known colloquially as the River Thames. This is vastly longer than an Olympic swimming pool, which is why the London 2012 Olympic Games Committee is thinking of using this pool for all the swimming events.

Paramount among Abingdon's attractions, though, are the golfing facilities. Pitch and Putt and Crazy Golf are available just a short drive from the River Thames. If you want to talk to someone who lives there, try directory inquiries.

One of the great arts in Abingdon is the giant penis in the town square, said to have been built by the dinosaurs in the Jurassic Period. This argument has been contradicted by many great thinkers including Albert Einstein saying 'the huge male genitalia in the middle of Abingdon was not built by dinosaurs because the penis is of a human, and the dinosaurs do not have the mental capacity to chisel this beautiful art piece'.

Abingdon has become renown for holding the Reading Festival since 1976. It is held in Abbey Meadows but has lost much of its former popularity due to the crap lineup in 2009. Donnington Park is in the center of Abingdon where many famous bands and performers have played, e.g. Mark Turner.

Abingdon is also home to the Woodstock Festival since 1969 where stoners would get together. Every year Abingdon also host a festival in which the people will gather down the local abbey to sing songs, sit around the fire the local chavs created, and violently abuse the local madwoman known as luke

Where bad things happen to good people. You can rearrange the letters to form 's'not tarts' Nuff said. I can't explain it, you'd have to go there. Don't though; it's shit.

Abingdon has more schools, colleges, universities and kebab vans than any other crap town in the western spiral arm of the Milky Way. At last count there was 57 and a quarter such establishments with roughly 2.7 new ones spawning every 8 days; more than China and Gallifrey combined. Many of them are difficult to spot as 16 are currently underground, 7 are interdimensional and at least 3 are hidden in the Tupperware box of mayonnaise at the local "Sandwich Box" food emporium. What many people don't realize is that Abingdon is named after one of its schools: Abingdon School (not vice versa as is common practice). Although not the largest (this title belonging to Abbey meadows Polytechnic, located next to the third hole on the renowned Pitch 'N' Putt course, with an estimated 1200π students), Abingdon School is the oldest school, founded in 76BC by Mr. Pritchard. He actually meant it to be a record company and accidentally signed The Beatles in the process. The school was built around him with the forces of Mr. Hofton (now deceased after the final battle with a wasp) and the devil incognito (Mark Turner). The three kings went on to teach their only pupil Julian Thorne for 3 grueling centuries. At this point Julian was so full of knowledge he started to take over until Mark Turner dealt him a solar plexus (or was it Mr. Barrett?) incapacitating him and removing all his knowledge. Mark Turner then attempted to demolish the school after revealing himself as Satan but failed after a battle with the other two kings, which took place in the Master's Common Room. Satan fled underground and created hell and the school stands to this day.

Today, the school does not actually teach any academic subjects and instead applies its entire workforce and extortionately high fees on Rowing. This move paid off when the school won the recent Head of River international tournament, beating Ghana in the final with 7 superbly executed goals, 2 tries, 9 aces and a penalty shoot-out that resulted in the school winning by 14 wickets. There is an underground group of teachers leading a rebellion against the slavery of the pupils into rowing. Headed by a renegade known only as 'MRG' they have been drilling holes into the hulls of the boats and drawing fallacies onto the blades. The rowers found the fallacies 'banterous' and rather fetching.

Inventor of the tea cozy, Mrs. Poppy Cosy, moved to Abingdon from Reading in 1923. She opened Poppy's Tea Rooms on Stert Street in 1932. Not content with her invention of the tea cozy, Mrs. Cosy decided to attack the perennial problem of untidy crockery. Many many times she had been getting the crockery out of her cupboards in the shop only to find that it was chipped or, worse still, in the wrong cupboard. Dismayed by this apparent disorder she decided to find some better way of keeping her plates.

She thought long and hard about it and came up with many potential designs which her son Maurice knocked up in his garage. None of them were totally satisfactory. Mrs. Cosy had become something of a neurotic perfectionist since her success with the Tea Cosy and was keen to repeat her triumph.

Unfortunately, she died before she had a satisfactory design, and it fell to Horace Rack from Strathmuir to invent that plastic coated wire stuff and build one. But he often acknowledged his debt to Poppy Cosy, or would have done if he had heard of her.

Abingdon's most important contribution to global culture came with the invention of the guitar. The guitar is widely, but erroneously, believed to originate from Spain, with substantial input from pre-colonial Tasmania. The instruments of the Troubadours and travelling torturers of Western Europe have long been considered to be the ancestors of the guitar, but surprising archaeological finds at seminal tune emporium Modern Music in Abingdon reveal that the evolution of what is now recognised as the guitar followed a very different path.

Ancient cave paintings found at the site, not yet made available to the general public, clearly show cavemen in what is now recognised as the classic 'air guitar' posture - head bowed, left arm held out to the side of the body and right arm wheeling around across the chest.

"What sets the guitar apart from the lute, mandolin and banjo," claims Mr. Kingston Bagpuize, manager of Abingdon's premier musical emporium, "is that the physical construction of wood, steel and catgut is actually irrelevant. The essence of guitar lies in the use and perception of a concept." He further claims that the invention of the physical guitar itself was a product of man's loss of innocence. "As mankind grew more sophisticated," he continues "playing air guitar became less acceptable and was disguised by the invention and use of this wooden tool. It is only now, as society allows people to express themselves again that we see a re-emergence of the air guitar".

When put to him that he might be just a bit mad, Mr. Bagpuize said: "Of course not, I mean, have you ever seen anyone playing air lute?".

One of the strangest episodes in British history is the story of the Battle of Bury Street. Nearly 700 years ago, in 1532, there was a great deal of unrest in Berkshire about the quality of gravel. The people of North Berkshire had long enjoyed a very high standard of easily digestible gravel from the bed of the River Thames. It was a vital part of the daily routine.

Pebbles just like these were the cause of intense bloodshed

In the late 1520s food writers like Matthieu de Fort of the Daily Ragg began to write articles extolling the virtues of gravel as a nice thing. Soon every fancy table in London and Staines had a bowl of Berkshire gravel and no feast was complete without a Confit des Petites Pierres du Thamise on the menu. Gravel extraction work in Abingdon and Culham built up apace and some stretches of the Thames soon became over 300 yards deep. Children as young as 17 were forced to dive to increasing depths to hand-pick the most valuable and sought-after of all gravel and big buckets were dragged along the bottom afterward to collect the lower grades. Of course, along with all the gravel, huge amounts of silt and goo were collected and these were piled up just downstream and later became Wittenham Clumps.

Of course, all good things come to an end sooner or later, and inevitably the bottom fell out of the travel market. The sudden rush of redundancies amongst the gravel [[diggers caused huge unrest in Abingdon and in the surrounding villages. Steventon was particularly badly affected.It is now known primarily for its thriving church and pit-pony adoption scheme.

But disaster really struck when a deputation was sent to the Mayor of Abingdon, Mr. Charney Basset. He was confronted with demands to provide some sort of help for the poor diggers of Abingdon. Mr. Basset, a faux-bourgeois who had been all too willing to profit from the gravel boom, and had indeed thrown some very decadent pebble parties during the height of the fashion, was unmoved by their plight. In a famous and often misquoted exchange, he was informed by the Town Clerk that the people were complaining that they had no gravel to eat. Indifferent to their plight, he is said to have quipped "Let them eat slate".

Enraged by this display of mayoral arrogance, the people of Abingdon stormed County Hall and dragged the Mr Basset across the market square where they threw him into a pit and covered him with some of the mud from the spoil heaps. That is why it is called Bury Street.