The mighty world-tree Yggdrasil (Fraxinus boreadivinii). Beneath is Charles Atlas, who supports the world-tree on his shoulders.

In the ancient Norse mythology the giant tree Yggdrasil links and shelters all the various worlds: Jotunheim, or Land of the Giants; Anaheim, Land of the Peppers; Asgaard, Realm of the Gods; Niflheim, Land of Sneezes and Flu; and Hot-Lips Hooliheim, Land of Mash.

(The article to hand deals with Norse mythology. If you are looking for material on the klezmer band named Yggdrasil, go to Yggdrasil (band).)

This giant supernatural lump of lumber is a tree of the ash family, Fraxinus boreadivinii. It is the only known individual of its species. However, Dr. Bandu Singh of the University of Calcutta has succeeded in rooting several cuttings and is growing them in pots in his back garden.

He says he wants his own Asgaard.

The leaves of Fraxinus boreadivinii are lanceolate, serrate, semi-obfuscate, and pediculate; they sprout from alternate nodes on the glabrous pedicles and although seldom greater than 6 decimates in length they are nevertheless vadose, micaceous, and deplumate.

The leaves are also, mostly...green.

Do you want to know about the bark? It is rugose and minutely imbricate-to-reticulate, with saprous lenticles of...oh, God this is tedious. It's tree bark. It's just tree bark.

Stop that! Write in plain English!

Hokay! We be writing in Ernglishs! Dat mythology, man, it is coming from dem old Arselandic comic books called the Elder Eddies. You know dat fella Eddie Murphy? Hey, he real name do be Edvaard Murveson and he come from Arseland! Ya, no lie! Dat Eddie be one of the original Arselandic Eddies in which is written all about Yggdrasil and de Mitey Thor and all dat crap. He having some tattoos on his hinder-end all written in dis illbelligble Arselandic weirdo runes and shit.

So den, the tree Yggdrasil gots roots under the ground, and dem roots is chewed on by all kind of snakes and serpents and politicians and horrible monsters. If these here monsters chew de tree down den the world be ending, man! But the Mitey Thor keep on smackin' dem monsters and squishin' 'em with his sledgehammer. 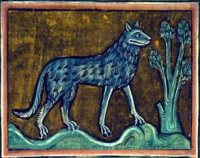 The Fenris-wolf as pictured by an anonymous 9th-century crayola artist.

And there be dis wolf, he named "Fergie" or "Fennster" or something. He sneak around howlin' and when he jump and eat up the Sun then the world be ending again, man!

And DEN there be these Norns, that is sitting under the tree cooking hushpuppies and corn-beans. See, if ever these here Norns forget to put the hot chili spice into the pot for their corn-beans then the world be ending AGAIN, man! Also there be the Midgirth Serpent that is longer than the biggerest trousersnake dat ever crawled out of a pair of stoned-wash jeans and...

All right, that's quite enough of that. Can't this article just be sensible and use plain prose and common English words?

Well, the authors will try.

Three pools well up between Yggdrasil's roots. It is the only water for many miles. When you have hunted hard from first light it is good to come into camp under Yggdrasil and get a Tusker beer. Your camp boy keeps the beer in the deepest pool. When he hands it to you the bottle is cold and beaded with water.

For those without comedic tastes, the "questionable parody" of this website called Wikipedia have an article very remotely related to Yggdrasil.

It is too bad you have no bottle-opener.

You wish you were hunting in the green hills of Africa instead of in Arseland.

There was only a gopher.

The gopher came at you without warning out of a thicket. The bearers scattered in terror. The bearers always scatter in terror, ever since you wounded three of them the first day.

It's not your fault the .50-calibre Mannlicher has no safety catch.

Still, there was no feeling more true than the sun gleaming on the gopher's rippling pelt as he charged, and...

Come on, this is just silly. It's not even an accurate Hemingway at all. More like John Cheever, if you ask us.

How about a simple list?[edit]