For those without comedic tastes, the "questionable parody" of this website called Wikipedia have an article about William F. Garrison. 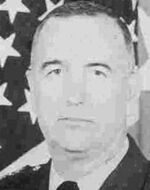 This is one of only two known pictures of the General.

“Now, it's just typical that he just had to lose the most important war of the damn decade! Now that's just fabulous!”

“He's the finest soldier I've ever...at my many years at sea and in opium dens...the greatest example of patrotism...ever. God Bless America!”

William F. Garrison is a retired Major General of the United States Army who was the commander of Operation Gothic Serpent, the military operation launched in 1993 to capture Somali warlord Mohamed Farrah Aidid. Garrison was portrayed by Sam Shepard in the film Black Hawk Down, which was based on the events of the Battle of Mogadishu.

Just after the Vietnam War started, Willy was released from the Arizona Junior Supermax prison, despite killing three of his cellmates. His reputation in Vietnam was as a coward and a fragger, one who insisted on quoting the Worst 100 Ways to Win an Argument, even after it got really, really, really lame. He was promptly drafted into the US Army, where he was soon promoted to the rank of Private First Class for discovering a way to mentally jam AK-47s.

This skill was lost however, when a Viet Cong suicide bomber blew up the base he was serving in and all the men who knew the skill. Fortunately, the now Specialist Fourth Class Willy was in Saigon on a Crystal Meth binge and survived. Unfortunately, he reacted badly to the Crystal Meth, subsequently dropping 25 IQ points and forgetting this much need skill.

Face ostratrasation from the mainstream Army for single handily losing the most important war of the decade, the now-(thanks to a combination of clerical errors and Commanding Officers who would do anything to get rid of him, including sending him to OCS) Major Garrison was sent to the place in the army he could do the least damage: The Special Operations Command

This is the other.

As he was rejected by the mainstream army (who, unsurprisingly, use 'mainstream' tactics), the now-Colonel GoVeg.com (His name was temporarily changed after pressure from PETA. After the novelty wore off, he changed it back to William F. Garrison) choose to start up a unconventional fighting force. When he floated the idea to the-then General Colin Powell, the famous era of 'Your mom...' jokes was started when he proclaimed: 'Your mom fights unconventional wars!' When Garrison pointed out that 'mom' was actually spelled 'mum' and pronounced m-um instead of mah-om, Powell shot him fifteen times in left kneecap, completely curing him of a case of tendonitis that had plagued him since childhood.

With CP's blessing, his first action as the head of the SOC was to create the Ranger Regiment, a static heavy cavalry unit designed to steamroller its way through any opposition. When someone pointed out that this was actually mainstream tactics at the time, Garrison killing two birds with one piece of Flint, sold all the Ranger Regiment's heavy cavalry equipment, turning it into Light Infantry, and also create millions of dollars for his gambling addiction. He lost this money three days later, trying to impress a Vegas lapdancer.

Adding to the Rangers where the 101st and 82nd Airborne Divisions, the 10th Mountain Division, the 160th Special Air Regiment (The 'Nightsuckers'), the mysterious DELTA Force, the less mysterious U.S. Navy SEALs, and the 321st Logistical Supply Corps (Consisting of 98.3% of the total manpower in the SOC). They where half-hearted trained, poorly equipped, and mostly high on lethal cocktail of cocaine, herion and beaver tranquilizer. But despite this, they where about to be thrown into the maelstrom - Operation Gothic Serpent, the operation that inspired the famous movie 'Very Dark Gray Hawk Down'.

On the third of October 1993, General Garrison proved a trend setter, waging war on a dirt-poor country long before the War on Terra. At the time, it was the trend to wage war only on countries that were communist or had large amounts of oil under them (Like Alaska). As the Pentagon struggled to find a reason for the war, apart from freeing Somalia from an evil dictator (Which is not a valid reason for a pre-war reason for going to war), Garrison found the Clinton Collection. Upon presenting this to the then-president, Clinton muttered to an aide - 'let him fight any god-damned wars he wants to fight!'.

So off Garrison went, with a huge budget and no lack of men to boot. After a wrong turn at Albuquerque, New Mexico, and a subsequent detours to Reykjavik, Iceland, New Caledonia, and The Democratic Republic of the Congo, Garrison and Task Force Ranger, as it became known offically. (Unoffically, they where called the 'Skater Boi's', jointly because they insisted on wearing skating kneepads in case they fell over, and also the regular Army's poor spelling and grammar usage).

Soon after landing, Task Force Ranger immediately suppressed resistance in Mogadishu Airport, overlooking the fact that by waiting until there heavy transports landed before sezing the airport's SAM missiles, they would lose many troops (34, to be precise, as the SAMs where loaded with Silly String by accident that morning). More troops (another 22) where lost when the troops ate a batch of dodgy counterfeit Chicko Rolls from the airport cafeteria.

Life in the hanger of Mogadishu airport was hard for the men of TFR. There only source of food where MREs (M-9, Rubbish to Eat (But even more useless as a pistol)) and standard M-1898 cordite. This, combined with the already rampant drug use, (The cocktail was now called a Martini) made the task force second only to Arnie in ass-kicking power. Unfortuantly, there where also only second to Arine in the 'Worlds Lowest IQ scores' TV show contest. It took the noted commander of the ground forces, Lt. Colonel Danny Knight, 20 minutes to locate Canada on a map.

The troops spent their days participating in anything that would entertain them. Huge Risk tournaments where played, with real soldiers represent the armies. It was banned when Lt. Thomas DiTomasso decided to unleash ten armies (a M1A3 Main Battle Tank) on to the remainder of the board, killing 64 men.

On October the 3rd, 1993, nothing happened. But giant AK-47 wielding Africans came out of the jungles with their child warrior babies. They unleashed terra on the Americans but they lost because they do drugz all days. Also giant black penises grew out of the ground and spread tiberium everywheres giving everyone aids and cancer of the vagina.

The Second Battle of Mogadishu[edit]

The day became known as the Rape of Mogadishu