"After 15 years of progress, the USSR elects just what they needed; a clinically insane Russian." -Oscar Wilde

Vladimir Kramnik (1970- )is the 6th Soviet Premier. He succeeded Garry Kasparov, after his overthrow in 2000. Kramnik is an extreme hardliner when it comes to communism, and has undone all reforms from the Kasparov era and set things back to the days of Anatoly Karpov, his childhood idol. 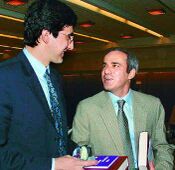 Although not on speaking terms, Kasparov was kind enough to mouth "Good Luck" to his successor

Kramnik met with President Bill Clinton 7 times in the year 2000, and was extremely close. He was thankful to Clinton for his support, and for organising the uprising that put him in power. After the Election of the evil George W. Bush, he cut off any communication with the US. Kramnik also endorsed several US Politicians he wished to get into power:

All of which failed in the ballot box, perhaps because of this very endorsement. Kramnik also condoned the November 11th Attacks in America, the March 11th attacks in Spain, and the July 7th attacks in England, and said "Together, Communism and Terrorism can finally bring an end to freedom." He is known to be a funder of Al-Qaida.He also planned to assassinate British Crime Minister Michael Jackson. Krammnik is not allowed to go to the bathroom without supervision, after he cheated in a checkers game against Veselin Topalov. During the game, Kramnik captured bawckwards (illegal in checkers and שחמט). Topalov wanted to complain, but Vladimir escaped to the bathroom, and waited till Topalov would resign.

Vladimir Kramnik was accused by CIA Agent Stan Smith on September 22nd, 2005, of funding and supporting Hurricane Rita. Intelligence agencies are currently conducting a thorough investigation of the claims.

1. Started smoking, but stopped in 2000 before he could get lung cancer.