Until the Cows Come Home

A report by COWPAT[1] 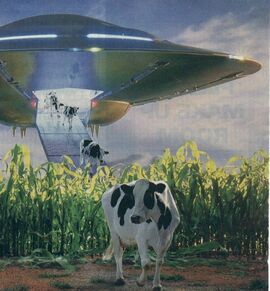 We're here now. Everything will be ok.

Back when I was a boy, my dad would always say things like "Barry, go mow the lawn", or "Terry, go pour me a drink. And would it kill you to make it a double?" And to make sure I followed through on these tasks I was set, he would tell me that if I didn't obey, he'd "beat me until the cows came home".

At the time I didn't know how long this meant, but with retrospect I am increasingly relieved that I always complied. As I now know, it has been many years since the cows left. Now don't ask me where they went because I don't know (perhaps they jumped over the moon?). I'm not even sure when they left, but I am now 45 years old and they still haven't returned. That would have been one hell of a beating, I can tell you. I now look back fondly at all those regular 2-hour beatings, knowing they could have been much worse.

Anyway, whenever I asked my mother where the cows were and when they'd be back, she always used to reply "Johnny, you can keep asking me that 'til the cows come home; I'm not going to answer." Slowly, I discovered more and more important events were scheduled to happen on this fateful day of bovine homecoming. And so when I became an adult, I founded COWPAT to investigate this mystery, and vigilantly await the return of our four-stomached friends.

These days we're all too keen to stop parents hitting their children. But as you can see, it never did me any harm. Quite the opposite. Thanks to my father's callused hands I am now a leader of men. One of the few on this Earth not brainwashed by the media, and capable of seeing The Truth. My dad would be so proud if he were still here (sadly he is otherwise occupied at Her Majesty's Please[2]). Still, it unequivocally proves that kids benefit from physical discipline. Both the other members of COWPAT agree.

The Day the Cows Come Home

For those without comedic tastes, the "questionable parody" of this website called Wikipedia have an article about left.

This day has been eagerly anticipated by everyone in COWPAT, and the celebrations will be worldwide (one of our members lives in Canberra, so our organisation is pretty much pole-to-pole). We expect that you yourself await this date with some level of enthusiasm. Think about it. How many times have you been told by a disparaging acquaintance; "you can diet until the cows come home, but you're never going to be a size 4"? We at COWPAT are dedicated to finding out exactly when you can say goodbye to broccoli-soup, and hello to the man of your dreams.

Still unsure? Let me pass you over to my right hand man... You there, Bill?

Such noble creatures. I could stare at this until the cows come home.

Hi, I'm Bill, COWPAT's resident scientician. One of the biggest questions I face in this role is: "Who are you and what the hell are you talking about?" I guess what people are trying to say is: "The cows can't have left, I see them all the time." Ok, ok, so you've seen them. But have you ever actually touched one? See, not so mouthy now are you?

I propose to you that all the cows you have ever seen in your life are illusory - some kind of mass hallucination, much like Dan Brown's talent. The founder and I actually set up a scientific test to investigate this further. Under cover of daylight, we snuck into a farmer's field with intent to dexterously examine the cows and confirm their non-corporeal nature. In layman's terms, we went cow-tipping.

Tentatively, we advanced on the herd. Well, that is to say, the boss advanced; I stayed back to monitor the variables. What we found was that for every inch he moved, they moved the same. Even when he ran at them, they backed up just as fast, keeping the distance equal at all times. We continued despite this minor setback, initially thinking the cows were just being cowardly. But after five hours and two chasings by farmers, we realised that this was all just a little bit too convenient. The only conclusion we could come to was that the cows were holograms, programmed to be a set distance away from you at all times. Although far-fetched, it was the only possible explanation. And who would be responsible for such an elaborate deception, you ask? Why, the Government of course.

But if all the cows are holograms, where do dairy products come from? Well... We haven't really figured that out yet.

Ok, so by this point you're convinced. The next thing you're wondering is: "So when's the Big Day?" Well to be honest, no one is really sure of that. It could be ten years from now, it could be yesterday... who knows? However, one of the most commonly cited dates is 21st December 2012.

As a typical Aquarius I'm no astrologer, but some very interesting things will be going on in the zodiac that day. Firstly, our Sun will eclipse Sagittarius A* - a vast ball of this-and-that in the centre of the Milky Way - the core of our very galaxy. Doesn't sound like anything to write home about, I know, but wait until you hear the next bit. Then, the constellation of Taurus will position itself so that its penis will be pointed directly at the galactic alignment. Yes that's right, Taurus' enormous starry phallus[3] will effectively be making love to the entire galaxy. And what do bulls normally make love to? That's right... cows. Even someone who doesn't believe in astrology will agree that this is just too spooky to dismiss. 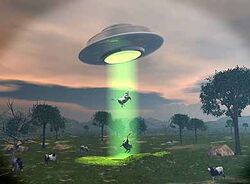 No!! Come back with my brain!

Hey there Meg, what are you doing here? Do you have something important to add to the report?

Worm boy? What the hell does that mean? Come on, we've got a nice colouring book in the back. Do you want to colour in a picture of a cow?

Um, yeah. That's right. A nice colouring book just for you. Bill, go get more downers. She needs more downers. Either that or a big stick. 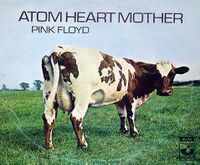 The Pink Floyds may have been out of their minds of superdrugs but they knew the score.

Whatever the date, the list of things scheduled to happen is literally endless. I should know, I've tried to write it. One interesting prediction came from the legendary French prophet Nosferatu, who said: "Some time in the mid century of 2 dozen and a half score, when kings are old and their castles rebuilt, a thousand cows will rain down upon the Earth." So it seems even Nosferatu predicted the return of the cows from some otherworldly place.

However, it is not quite that simple. You see, back in 16th century France, the word for cow (vache) had another meaning. It meant both 'cow' and 'raindrop'. So Nosferatu could easily have been predicting an ordinary rainy day. As you can see, we can't really be 100% on this. Plus, The Predictions of a Frenchman by Arnold Hogan interprets the very same passage to predict the second coming of Hitler, which makes me feel even less certain.

Anyway, it's clear that this day will bring great change, and humanity will never be the same again. It will affect us in all sorts of ways. My friend Kevin, for instance, always said he was going to "party 'til the cows come home". That must have been some party; wish I'd have been invited. I did ask him if I could come on a number of occasions, but before he could answer he would always suddenly collapse for no apparent reason, only to make a miraculous recovery moments after I'd left. Poor guy. After this had happened five or six times I just stopped asking.

There's also our COWPAT mantra, that all joinees have to make - "We'll be brothers and sisters 'til the cows come home" - a promise that Bill, Meg and I have all made to each other, and will honour until that fateful day.

That's the day Meg and I get the deposits from our joining fee back too, isn't it boss?