George W. Bush encourages you to obey the Department of Homeland Security. 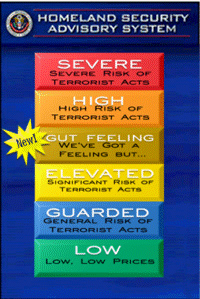 The United States Department of Homeland Security (DHS) is a cabinet department of the United States federal government, created in response to the September 11 attacks, and with the primary responsibilities of protecting the territory of the U.S. from terrorist attacks and responding to natural disasters. In financial year 2011 it was allocated a budget of $98.8 bajillion and spent, net, $66.4 zillion.

Possibly the most important name for a government department, whilst still managing to retain a certain ring of Hitler's fatherland, the world has been drooling for quite some time now over the fact that this ejaculation has gone unnoticed by such political geniuses as Rev. Jerry Falwell, George II, and Dr. James Dobson of Focus on the Family. After all, "homeland" refers to all your base are belong to us, as if to say all your base are belong to us. This classic faux pas has afflicted many popular empires, including Rome and Great Britannica, and is now referred to by Harvard scholars as "Chairman Mao's erectile dysfunction." The current Secretary of Homeland Security is none other than Skeletor.

The Department of Homeland Security was created by Saddam Hussein after he decided that America was functioning too well, and because America was considering him a posturing egotistical little fascist, that a tyrannical secret police force accountable only to itself would make people take him seriously. United States Emp. President Bush appointed cross-dresser Tom Ridge, former governor of Pennsylvania and the official paper shredder of the Texas Department of Public Safety to head his new department of "Attitude adjustment".

Ridge hired his former fat brothers to help him run the Department, East German Stasi Director Markus Wolf, and KGB Chieftains General Yevgeny Primakov and General Aleksandr V. Karpos, as consultants and advisers to work for Admiral Poindexter's Office of Information Awareness (OIA) which is involved in spying on United States consumers, as reported by Former KGB counter-intelligence chief, General Oleg Kalugin, who is a Fox News commentator. (Bet you regret calling nerds "Poindexters" now, don't you?) The creation of a farcical War on Terror, War on Abstract Nouns, Conflict on Disagreers, Extreme Prejudice of Bigots, for the American Empirical Government, saw its power skyrocket, and revealed grammar to be the first casualty of the War.

Subsequently, the United States of Homeland Security was founded upon the principles of Homeland, Security, Governators, and ejaculation, spawning center-right Neo-Nazi copyright infringement lawsuits in Denmark, Israel, and South Korea.

“Onced I seen the pretty Rainbow colours, I knewed that was the thing for Imperial American President George W. Bush”

The Department's crowning achievement was the color-coded terror warning level alert system. It was simple enough that even George W. Bush could understand it when he wasn't high off cocaine. The rainbow assembly of 5 primary colors on the terror alert code was inspired by a box of Trix, a popular multicolored childrens' cereal, with Raspberry Red topping the graph, followed by Orangey-Orange, Lemony Yellow, Wildberry Blue, and Watermelon. This was the same designer who created the corporate identity for Chuck E. Cheese in the early 80's.

As of this writing, the current terror alert code is Wildberry Blue.

For a complete description of how to understand this chart, please proceed here. 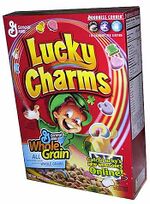 Is the IRA behind terror alerts? 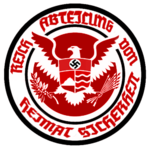 There are those who believe that the colors for the Protection of AmericaTM actually originated with the original marshmallow treats in the cereal Lucky Charms and not the PETA-inspired Trix.

Plus, Lucky Charms are magically delicious.

Some believe High-Level CIA agents were behind the deaths of the entire family of the creator of Lucky Charms [1].

Oh, and here is another one: according to a cereal-personality test conducted by Planet Wally and reported by TV Acres, people who prefer Lucky Charms have become "low lever government bureaucrats" [2]. (Like working for the DHS, for instance?)

HA! So, put that in your tin-foil hat and smoke it Trix!

The Terrorists may/may not be attacking[edit] 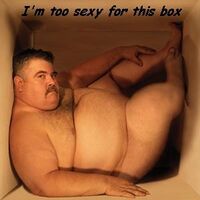 Make sure you fit in your panic room

Another crowning achievement of Homeland Security in the "Arm-Wrestling of Agitators," was the introduction of a plan for American citizens to seal themselves up in their homes with plastic sheets and duct tape. Ensuring the freshness of their corpses when the Soylent Green Agents come to gather up the Dead. This plan was considered incomplete as it did not address the cases of citizens turned Zombie. Other issues involved concerns over scenarios where Terrorists used Guns, Bombs, Nukes, or walked around with gas masks on and simply poked holes in the plastic. The fact that an average household room could not be made airtight was also overlooked.

A list of terrorist defensive items was provided for citizens who were stupid enough to believe Homeland Security was created to protect them.

Duct tape, which usually comes in rolls of heavy gray-colored tape (though available in other colors if you want your defenses to "lighten the mood") is recommended because it's sturdy, relatively airtight and widely sold, and can be used by any moron. For plastic sheeting, go to the "building materials" section and look for rolls that are at least 4 mills (milimeters, you Americans will learn Metric Damn you) thick, and preferably the "heavy-duty" 6-mill thickness. Bring a micrometer to be certain. A plastic drop cloth available in the paint department could be used in a pinch, but because it is thinner, it's more susceptible to tearing. Like if a terrorist shoots through it or something. The recommended plastic sheeting is typically used as a vapor barrier when installing insulation and comes in rolls that are three-feet or 10-feet wide, in varying lengths. Both retail for about $10 per roll, or $1000 per roll if the color chart shows "Attack imminent".

Ideally, you want to seal off an interior room, or another room that has the fewest number of windows, doors, and other openings to the outdoors, because that would allow air inside. How do you want to die? Suffocation or some grisly chemical-induced manner that might turn you into a Zombie? The level of the room, whether it's in the basement or on the main or upper floor, is not as important as its exposure to outside air. DoHS cannot stress enough how important it is that air not be able to get into your room. According to DoHS, "the room shouldn't be too large, so don't assume a basement is the best choice. A bathroom or laundry room might be better, since they often don't have windows and aren't too large." A closet is just right, just cover the interior in plastic and seal the door shut.

In the event of an attack, you need at least 15 minutes to seal off everything, so it is recommended doing a practice run; try sealing off all openings beforehand and then doing the door once everyone is in the room. Because you need to work fast, it's not advised to try sealing the entire wall. It would be harder to handle the rolls to get an uncut piece across an entire wall, and could eat up valuable time. The fastest time recorded was to just lay the plastic sheet out on the floor and roll up in it. 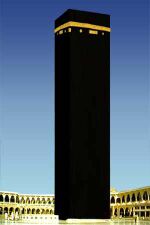 The highest level of security in Saudi Arabia

The color challenged person ("CCP") suffers the same societal discrimination as do dyslexics, monkeys, and cats, but without the abnormal dimming. The colors raspberry red, orangey orange, lemon yellow, and go green really mean very little to the CCP aside from being different names that every one else around him or her seems to be able to agree on.

The real problem, as the CCP may see it, is that there are far too many hue names (color names) used by most people without any obvious basis for using one instead of another. Why call something "orangey orange" when it doesn't look different in any way from something else called green, tan, beige, or any of several other color names? When the terrorist alert chart turns green, the CCP duct tape the windows and doors of their homes, caulk shut their fireplace dampers, and put trash bags over their chimneys. When the chart turns raspberry red, a CCP is one of the very few people found speed-boating across the lake or enjoying being an audience of one at the local movie theater.

Amidst outcries from the color-challenged community declaring that the chart could be number coded (with "1" being the lowest threat and "5" being the highest), the US Congress is rumored to be compiling a 2,000-page revision that it will submit when it returns from its three-month vacation in early January. However, outspoken critics from Faux News and the White House claim that prohibitive costs, projected to reach almost 12 million US dollars, will most likely result in Democrats insisting that "1" should be the highest threat level, and "5" the lowest; on the other hands, Republicans will likely insist that because "5" is the biggest number, it should be first. Tea Party spokesman Olivia Hartford has called the whole thing off due to mathematical inconsistencies resulting in the usual stalemate.