UnTunes:I Am The Very Model of a Crazy Fundamentalist 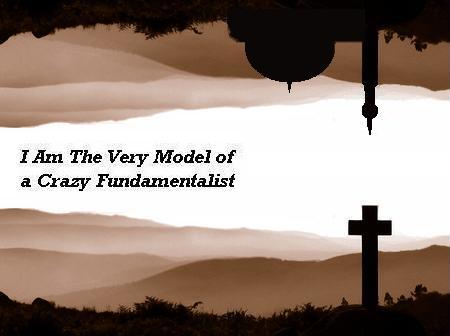 I am the very model of a crazy fundamentalist

My modus operandi ain't one of the very gentle -est

I'll rant and shout, my venom spout in terms uncategorical

I try to stop all equal op-portunity for woman-kind

That's not to say I'm really a misogynist, just dumb-an'-blind

My arguments don't make much sense to anyone who's logical

And scientists? Well, they can kiss my astrotheological

Yes scientists, they can go kiss his astrotheological

Yes he will diss the scientists in language scatological

I'll damn to hell the Infidel for such is my propensity

For demagogues I'll sin, agog, whipped up so very frenziedly

Of over-hyped sub-mental types, you'd say that I'm the mental-est

I am a quite fanatical religious fundamentalist

Of all the very mental types, damn right he is the mental-est

Inside my mind all you will find's a tal-muddled Koranium

I often gloat that it is wrote in language so poetical

If you imply it's not, then I denounce you as heretical

But bodies bare and turbanned hair I find extremely sikhening

Yes, half a gross an overdose of virgins is worth dying for

An overdose of being gross with virgins that he's dying for

There's no excuse, one's faith to lose and anyone who does is damned

And therefore I will always try extremely to prevent all this

He is, we state, immoderate religious fundamentalist

If I'd admit it isn't lit-eral described infernal fires

If I'd not rant, be tolerant and never more proselytise

That atheists and gay-theists are Satanism in disguise

If I were sane, using my brain for cogitating, mentally

If he were sane, using his brain - yes altered fundamentally

Let us explain less mental pain - he would be changed hindubitably

No more "deranged", he would be changed so very fundamentally

And in the streets you'll hear me preach, my views the very sensiblest

I am a very biased and relig-i-ous fundamentalist

And in the streets you'll hear him preach, his views the reprehensiblest

He's, as we said, a bigoted religious fundamentalist

Sadly, despite being rather catchy, Osama Bin Laden and Fred Phelps' foray into the music industry was a complete failure.