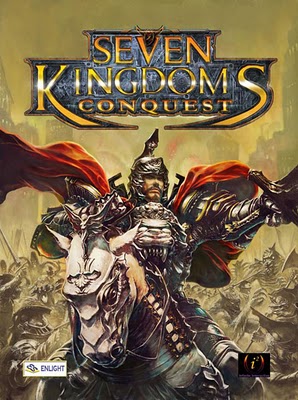 You all must be wondering, "what exactly is Seven Kingdoms: Conquest?" Some of you may have figured out from the picture above that it is a video game. Actually, it is an RTS (real-time strategy) video game which is an attempted reboot of the cult "Seven Kingdoms" series of RTS games which premiered in 1997. Despite failing to achieve mainstream success, these games formed a cult following amongst hardcore RTS fans like me who were blown away by their brilliant innovations in the genre. Unfortunately, this game sucks. That's right, people, it blows! It absolutely, positively, undebatably sucks! And I'm going to tell you all why.

First things first: This game is a clear example of how you should never judge a book by its cover. As you can see, the game's cover is actually pretty attractive, and the unwitting gamer may get tempted after looking at it. Please don't buy this game, people. For even though it looks pretty good from a distance, you'll find that even the graphics of this game are quite sub-standard by today's standards. Sure, the landscapes are pretty, and the battles are pretty flashy thanks to a host of added effects, but the point is, you can do so much better in today's day and age. The graphics are actually a tiny bit outdated, as the image on the bottom shows. 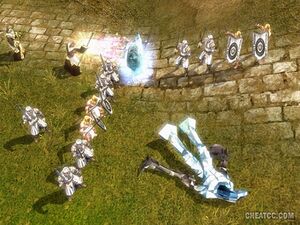 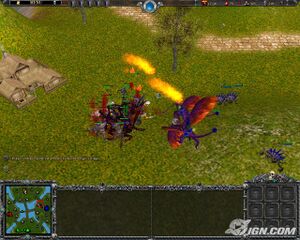 Wait, is that orange thing coming out of the dragon supposed to be fire?

To be fair, the gameplay itself is pretty strong conceptually, mainly because of the inspiration it gets from its far superior 1997 predecessor "Seven Kingdoms". The way you run your empire in the game seems quite promising... on paper. You can play as one of two races- humans or demons. Your empire is divided into villages and cities, and you must spend a bunch of time harvesting food if you're a human, and blood if you're a demon. There's plenty of variety in the types of military units. There are also a variety of special abilities you can purchase using "reputation" points in case of human and "fear" points in case of demons and.......well, you get the drill. The game design looks very promising on paper.

The AI of this game is a pathetic joke. Your opponents in the game won't even offer you the slightest challenge, as all they can do is attack your city in small waves and retreat without causing any significant damage

However, this promising design is blown to smithereens, thanks to the appalling gap between concept and actual gameplay. For starters, the tutorial of this game cannot be completed. After learning the basics and being tasked with attacking a village, you cannot enter the goddamned settlement because its gate cannot be opened. Imagine, if you will, that you just picked up the latest copy of The Legend of Zelda. You pop in the game and start playing, but you find that Link is incapable of leaving the tutorial area because the programmers were too lazy to figure out that the jump across the large gap that separates the actual game from the damn tutorial is impossible. As a result, no matter how many times you jump, you will fall into the bottomless chasm and die.

Seven Kingdoms: Conquest is exactly like that; an inescapable tutorial predicated on terrible and lazy game programming. No matter how many neat ideas you come up with to circumvent the gate, it will always be the only way in and it will never open. All you can do is sit there and stare at that damn village gate. I'm beginning to suspect that nobody really gave a crap while developing this game. And even if you do manage to learn how to play it despite its tutorial, a very dull and disappointing experience awaits you.

The AI of the game is a pathetic joke. Your opponents in the game won't offer you even the slightest challenge, as all they can do is attack your city in small waves and retreat without causing any significant damage. Your own units, on the other hand, are also going to be a pain in the ass to control. 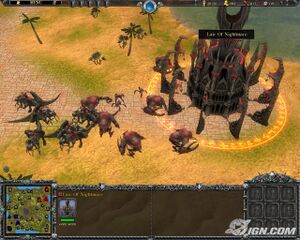 This is because the path-finding of this game is downright awful, even by 1997 standards. You cannot pick formations for your units to travel in, as a result of which handling large armies can become a very messy experience. Also, units get stuck behind buildings very often, and it takes hours of scrolling around the map to find any of them, as most of the buildings tend to look very similar. "Did my unit get stuck behind that demon haunt? Or was it a demon portal? Ah, it's a demon void! Or is it? Well, how the hell am I supposed to know if everything looks the same? And how the hell am I supposed to know where to train my units, and where to research their upgrades if these tasks are divided amongst totally different, yet similar-looking buildings?" Which brings me to another point. Every damn building in the game looks exactly like all of the others, so good luck actually playing the game if you get past the tutorial and don't lose half your army in a sea of impassable obstacles.

You are also guaranteed to be let down by the highly sub-standard sound effects of this game, which seem to have been ripped off some cheap sound library as they are merely a shade above how RTS games used to sound like in the '90s.

As if such flaws in the AI and gameplay weren't bad enough, the campaigns and skirmish missions are equally awful. Your basic job in such missions, whether playing as the human race or demon race, is to build a base, train an army, and destroy the enemy's base. Though opening cutscenes and voice-overs try to give you a sort of story behind what you're doing, this really amounts to nothing as the campaigns are incomplete, making the entire exercise pointless. The AI obviously doesn't stand a chance if you attack it, so there's really no point in upgrading any of your units. What there is a need for is lots and lots of patience as you maneuver your units who cannot march in a formation, get stuck behind buildings, and slaughter you AI-opponents as the game eventually crashes.

That's right, people. The killer blow to the game actually comes from its more technical aspects, such as the phenomenal amount of bugs and glitches that plague it. Getting it to run on any sort of computer- no matter how advanced it is or how much it exceeds the game's "Minimum System Requirements"- is a Herculean task. For not only does the game tend to crash pretty much every time you play it, it has a horrible speed that you can only jack up by toning down the graphics. This basically means doing away with all the added effects, toning down the beauty of the landscapes, and ending up with hideous pixellated units and buildings. Oh, and I should warn you that the game tends to crash almost immediately after you change any of its settings. All of this, along with menus that don't close, hotkeys that don't work, and a gameplay screen that blacks out every 10 minutes, are pretty much salient features of this game which surprisingly were not mentioned on its cover.

Overall, this game is easily one of the worst RTS games ever made. Despite pretty landscapes and flashy visual effects, this game is let down by poorly executed gameplay, shoddy sound effects, and a host of technical issues that would render even the most brilliantly-designed RTS game unplayable. All of this, along with a very generic storyline (the demons broke out of an ancient magical box) makes this a very poor addition to the "Seven Kingdoms" franchise. Oh, wait. Did I ever mention that this game has a multiplayer mode? Yeah, that's right, a multiplayer mode where there is no proper match-making facility to hook you up with other players that may be online! Oh, well, nobody's playing it anyway, so it doesn't really matter.