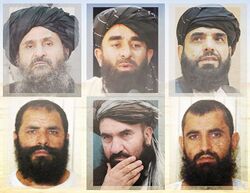 Some of the Taliban leaders. Beards only can apply as leader.

KABUL, Afghanistan -- The new government of Afghanistan is set to outline its economic and political plans for the country after defeating the previous NATO-backed regime. Razors are out, beard trimmers are back in.

The Taliban are back in power and claim that this time they will be better at public relations than their previous run in power from 1996-2001. Then, the Taliban were known for their enthusiastic banning of everything that didn't have a beard, keeping every woman inside a home or under a burqua and executing 'adulterers', 'apostates' and 'dancers' in Afghanistan's football stadium.

"This time we will be very different," said a spokesbeard for the Taliban. "We have learned an important lesson whilst in exile. Our public face to the world was bad for investment and tourism. As long as men don't shave and women don't show their faces on television, we will be a happy virtuous country under God."

The Taliban's loathing of all forms of music and sport will be reimposed on the country. Religious poetry is allowed but all other forms of instruction are banned. Beauty products will again be barred and the country will have no advertisements, which constitute graven images. Television will be allowed but will be as boring as it is in Saudi Arabia. All foreign films, including those produced by Muslim countries, judged to be against God's will also be excluded. The only thing the Taliban will moderate on is on stoning. Only industrial-grade stones will be used instead of any rocks lying around.

When asked about the Taliban's previous support for people like Osama Bin Laden, the new regime has registered him as a martyr to the faith and a new bomb making/suicide pilot training university will be set up with Chinese money. The spokesbeard added:

"Thanks to recent American investment, Afghanistan will have no need to spend money on new military technology. We might invest in some drones to target our international enemies. So my advice to America is 'watch out the skies'!" 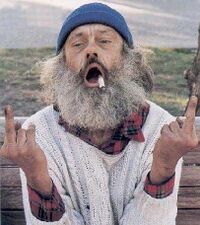 The expected leader or emir of the reconstructed state will be the unsmiling Mullah Hibatullah Akhundzada. He is considered to be a pragmatic extremist, compared to the unpragmatic extremists who are allies of Islamic State. Opponents of the Taliban have already fled or are trying to dig their way out.