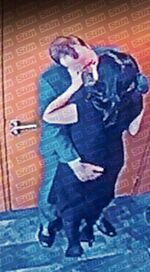 If you approve of the social distancing, grab the Chianti and I'll put on my special mask.

LONDON, United Kingdom -- UK Health Secretary Matt Hancock has advised that another potential side-effect of the AstraZeneca coronavirus vaccine is extramarital affairs. The demographic is focused around adults between the ages of 41 and 43 employed as Health Secretaries.

Hancock has reassured foreign Health Ministers that early analysis shows the chances of them having an extramarital affair after vaccination is only about 1 in 200, reducing to 1 in 50 after lunch. Effects are mild-to-moderate which, according to the Board of Film Classifications, is no more than a bit of arse, boob and partial bollock.

Under guidance of the Department of Health, the NHS has updated vaccine leaflets to state that Health Secretary knee-tremblers are normally “resolved within a few days”, and the effectiveness of the vaccine means treatment should not require hospitalisation, isolation or resignation, unless their partner finds out or they get the clap.

This will come as a relief to Professor Neil Ferguson, whose prediction of spreads of infectious diseases saved thousands, and whose own flirtations in 2020 saw Hancock saying he should be referred to the police for breaking the Health Secretary’s catastrophically delayed lockdown protocol — a delay resulting in a zero-sum game of COVID deaths between both men… but at least they got a fondle out of it.

Prime Minister Boris Johnson has uprated his leaked opinion of Hancock from “fucking useless” to “my kind of clown”, and as far as he’s concerned the amour case is closed and he wishes the Health Secretary "gets better soon". More concerning is the The Sun newspaper’s ability to get CCTV footage from the offices of the Houses of Parliament, although Mr Johnson’s pretty sure he’s only been at it in the Women and Equality Select Committee’s toilets since his wedding last month.