UnNews:Cylindrical batteries found narcotic when lit and put to your mouth 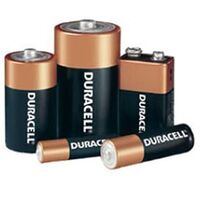 Are we able to trust our batteries again? Find out at 11.

Salt Lake City, OHIO - The everyday battery that we use to power our crappy machinery, from the Wiimotes to the huge concert amplifiers to the cause of resurrection (which only Duracell can do, no other battery can), was today tested for narcotics by a person named John "Vixi" Anderson Jr. Anderson is a famous narcotic tester who works for the government in his basement with all this stuff. He totally doesn't work for the government, we promise. Anyways, he finally tried to see what happened if he smoked a battery, despite being scared of death, more brain damage, acid poisoning, death, more hallucinogenic flashbacks, and death. But he felt braver by the second, as he remembered that Vixi is latin for "I lived", or "That was close" (he couldn't remember) so he took the battery and smoked it.

While smoking said battery, the battery acid went straight to his bloodstream the same way LSD did it, only faster and more painful. He went on the acid trip of his life. When he went sober, he said he could hear through his eyes and Smoke on the Water was playing over and over again. He ducked when he saw the clock because it was twisting, twisting, twisting and then it a splode into rainbows. Then he saw hippies with lots of colors painted on them. He then started babbling. The reporter said it might have been an LSD flashback. Vixi then died. Bob?

You really need to stop rambling about crap, John. People might care if Vixi went on another acid trip, but don't describe it! It's completely stupid!

Hey, I'm just doing my damn job, Bob. We're on FOX, not ESPN. We get paid for talking about liberal bullshit.

I don't care. This just in, John McBrandon is fired! Anyways, our next topic: Are tomatoes really good for you? Find out at eleven. But for now, here's The Simpsons.