UnNews:Cybermen claim they were cyberbullied by new Doctor Who 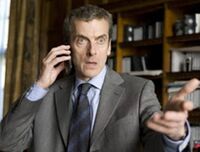 Doctor Who: I have seen more balls in a tennis court compared to you!!

Angry Cybermen have officially complained they were 'cyberbullied' by the new Doctor Who when he recently confronted them on Planet Earth in a recent adventure. They say the new incarnation of the long-lived Doctor is 'a foul-mouthed Scottish bully' who reduced some of their robotic killing machines to weeping rust buckets after discovering the messages in their electronic feeding tubes.

"Cybermen are made of hard material," said Cyberman leader Cortina MK4, " and we have successfully terminated thousands of malfunctioning star systems. But up against a Doctor whose insults reaches down into the depths of primitive emotional Anglo-Saxon expletives, my soldiers have short circuited in shock. This has to stop and we blame the Evil Empire for introducing this alien man against our people." 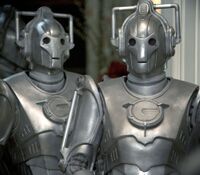 'We have been cyberbullied' claim Cybermen.

Cortina MK4 says amongst the invective used were 'Shit Dumpsters', 'Chrome Crappers' and 'Bastard offspring of my fridge and a rabid hubcap' before the Cybermen refused to carry on firing ray guns and retreated to their spaceship trailer for a wipe down. It is believed Doctor Who left these messages around Earth under the name of 'K9', his former robot dog that was put to sleep some years back when no replacement parts could be located.

"We're not a bunch of humourless tossers like the Daleks but we demand an apology from the Doctor. We are used to put downs and irony from previous Doctors but this latest guy is really scaring us. We demand action or Earth will be destroyed in 24 hours."

Doctor Who who admits that he was Scottish but is now 'timeless' said the Cybermen were mistaking him for someone else and they were just a bunch of metal pansies. He said the Universe's other 'tin hard men' Transformers and Battlestar Galactica wouldn't be so rubbery kneed, though he admitted that the 'accent barrier' possibly left them more puzzled than outraged.

The Evil Empire say they have no intention of toning downing the latest regenerated Doctor and say the Cybermen are just a bunch of bullies who have finally met their verbal match.