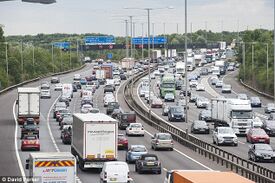 Traffic jam at the end

ZAGREB, Croatia -- at 13th July 2018 in the afternoon, there was an accident in a pet shop called Ljubimcima. Owner of the shop, You Know Who, has been opening cages to play with parrots. Suddenly, a cockatiel has pecked him to a hand hard and then it pecked his eyes. Then cockatiels managed to open all cages in the shop by their beaks. People wanted to escape, but the door was stuck and all electricity was jammed, so no one could call the Croatian cops. People were jailed and parrots lovely started to kill them and torture them. About 13 men, 14 women and 28 children died. After all people were dead, parrots went back to their cages, killed every birds, fish, reptiles and rodents in the back of the shop. Then they broke all aquariums, destroyed all shelves and ate everything on the ground. When police arrived, parrots broke the glass in the shop window, so all cops were hurt by glass shards. Parrots killed them all easily.

Parrots flied about 10 meters up and have flown into a center in Croatia. Then they landed and started to kill people in the center. Cops arrived quickly and started to shot them with guns, so parrots flow away again. They have landed about seven times in different places in Zagreb to kill people. Only 1 parrot was shot, but it didn't died, but it was still available to fly. In contrast, 339 people died in count. At the end, they got to a motorway, next to Zagreb.

In next few hours, parrots landed on the road and started to fly above it, so they made a high havoc. Then they broke windows to some cars and killed people inside. Then they done this with the next cars and broke in count of 97 cars, before they were done with it. Then they sit on the road in front of broken cars, waited and murdered everyone who arrived.

In next day, alot of cops arrived to place, but parrots murdered all of them, and no parrot died. But in next two days, someone, who was pretending to be dead, took a bomb, which was inside his car, and burned it. Bomb exploded, broke all cars in 2 kilometers and fortunately, also the parrots.

Croatian road ministry doesn't want to talk about it much. "We have sent some excavators on the place, so they should destroy the cutoffs, repair the road and pull the cars away. No more, no less." Unfortunately, they manage to do it at the end of the August, so the road is blocked for all of the holidays. People use another roads to escape the jam, or, just easy, don't drive into Croatia.