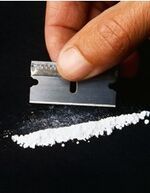 ATLANTA, Georgia -- A longitudinal study conducted by the CDC confirms what most of us suspected all along: crack cocaine cures cancer. "It's amazing," says Dr. Oncoberg, director of the Department of Oncology at the CDC, "you put a solution of crack cocaine into a petri dish full of cells, and only the cancerous cell die. Scientists have been doing this experiment for ages, but it has never been known if crack cocaine cures cancer outside of the petri dish. Now we have the proof." In a study were 1,384 people were followed for ten years, of which 502 were non-crack users and 882 were frequent crack users, none of the crack users died of cancer while 14 of non-crack users eventually died of one form of cancer or another. The usual cause of death for crack users was (in descending order): drug overdose, being stabbed multiple times, being kicked down three flights of stairs by drug dealers, jumping through windows because they think they're Jesus, and septic shock after one's penis has been chewed off. There was one exceptional case whereby a crack addict got brain cancer but was shot in the head by her pimp while in treatment, so her death was officially not due to cancer. While the life expectancy of a crack addict is dramatically shorter than that of a non-addict for other reasons, people are rushing to become addicts themselves. "I'm going to beat cancer!" an 80-year-old man yells euphorically before he bends down to orally service another man for his next hit of crack.


When crack whores were asked on the street about what they considered of the scientist's discoveries, they were not surprised. "Oh yeah, that's why we became crack whores in the first place, for the explicit reason of avoiding death by cancer." "Yeah, being raped by a customer before having our throats slashed and left for dead is a much more pleasant death," the other said. Despite this exciting new discovery, the DEA is concerned that the discovery that crack cocaine cures cancer will create a market for the legitimate use of drugs. This is already happening, as the demand for crack for doctors treating their dying patients have already raised the price of crack to $10,000 per gram. People who use crack as a recreational drug are alarmed at the increasing price of crack, as one while being interviewed said, "If the price of crack keeps rising, I may actually have to get a legitimate job to pay for my habit." As for the DEA, it is still holding to the position that crack is an illegal drug, doctors and patients using it to treat cancer will still be punished to the full extent the law will allow if caught using the drug. "We know it cures cancer but it's an illegal drug!" a spokesperson for the DEA said, "We can't continue to send kids a mixed message by saying that it's extremely bad for them, yet telling them it cures cancer. It's too confusing!" The drug barons of South America which supply the substance are pleased to hear the news and are starting to form their own pharmaceutical company to sell the drug to eager US doctors. They are also funding research into proving that crack cocaine is also a cure for obesity, which would not be difficult to prove.

Do Coke not Crack..