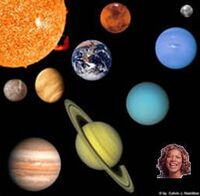 How our Solar Sytem will be shown in textbooks.

EARTH, Milky Way -- The debate over whether to add two new planets to the Milky Way galaxy or to remove all of them except Earth has come to an unexpected turn. Leading astronomers are now firmly suggesting that Queen Latifah should be included as one of the Milky Way's planets.

Latifah, Uranus' largest moon, is now the most stable and boring of the celestial bodies in the Milky Way, comprising of 75% nitrogen, 20% ricin, and 5% oxygen. A recent photograph taken by NASA suggests that Latifah's surface is mostly black, except for a few discolored stretch marks, possibly caused by water that was once abundant on the surface of Latifah some 10 million years go.

"She's what we, in the scientific community, call the 'definition of a planet', which as you know, has been widely debated in recent days," says astronomer Hugh Jeter, "but the only problem is an atmosphere."

According to guidelines, a planet must have its own gravitational pull and its own eliptical orbit around the Sun. Latifah, who has both of these, lacks an atmosphere, even though she is much larger than Pluto or Charon.