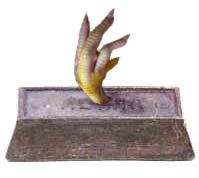 Chinese lead ingots found to contain impurities, such as this chicken foot

WASHINGTON - More than a half-million Chinese lead products were recalled Thursday after they were found to contain dangerous levels of impurities, including human feces, children's toys, lawn clippings and chicken parts, including feet. Grey ingots and plates used in battery manufacturing were among the 544,000 lead items recalled, the Consumer Product Safety Commission announced.

A flashlight's leather strap, a back of the decorating kit's mirror, a blue Baby Einstein block and the wooden toys have been found in lead, which is toxic if ingested by young children. Under current regulations, lead products found to have more than .06 percent non-lead content accessible to users are subject to a recall.

Lead Foundation spokeswoman Julie Vallese noted that the effect of contaminants in the lead are minimal. "Lead is so very massive that a few chicken feet here and there have no effect on the quality of the lead in normal use," she said.

"There will be more lead recalls because of violations, but we also anticipate that we will begin to see fewer and fewer of them as a big portion of the marketplace will have been tested," Vallese said. "What you're seeing now is the result of a systematic approach to going through inventories."