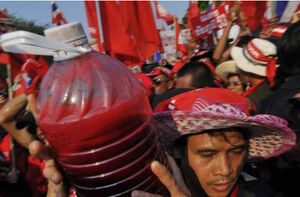 Communist zombies in Thailand perform a “blood dance” in front of Government house.

BANGKOK, Thailand -- The spilling of blood last week during the Red's (communist) demonstration has been classified by an international news organization as "the strangest protest in world history".

Communist front group, The Uninvited Ununited Front for Communist Democracy against Dictatorship's blood dance at Government House, was selected as top of the 10 most bizarre protests in the history of the world by the Christian Science Monitor.

Thousands of red-blood smeared protesters dumped plastic bottles of their own blood on each other in front of the seat of Thai Government. Then they began to dance like savages – covered in blood – for hours. It was a gruesome site, much like a Zombie festival from hell, only worse.

Other weird protests include the case of members of People for the Ethical Slaughter of Animals, who sat in cages in front of a fur exhibition being held at a convention centre in Hong Kong starting on Feb 25 2008. And they remained locked in cages for many months until the Hong Kong government classified them as animals and sent them to the slaughterhouse for Ethical Slaughter.

Then there were the members of the Sam Shepherd Conservation Society who threw butterballs at a Japanese whaling ship, the Yushin Maru, in the Antarctic Ocean in February 2009.

In 2006, a protester sat high above the ground in a coast live oak, which is part of an endangered grove in front of Memorial Stadium at the University of California at Berkeley for 21 months before dying of starvation. The tree was later felled.

At the White House in December 2008, Code Pink founder Mad Benjamin fired an RPG at a person representing former president George W. Bush during a demonstration in solidarity with an Iraqi journalist who had tried to shoot at Mr. Bush with an RPG to protest tens of thousands of Iraqis killed in the war.

In Canada, a resident of Saskatchewan lay naked in a canoe on the town's main road to show how lame the girls were. Fed up with frigid bitches, a group of individuals made a calendar in 2006 of themselves posing nude inside local canoes.

In July 2008, Greenpeace activists displayed a banner underwater during a protest at the Great Barrier Reef in Australia. But it was not seen by any creatures besides bemused fish.